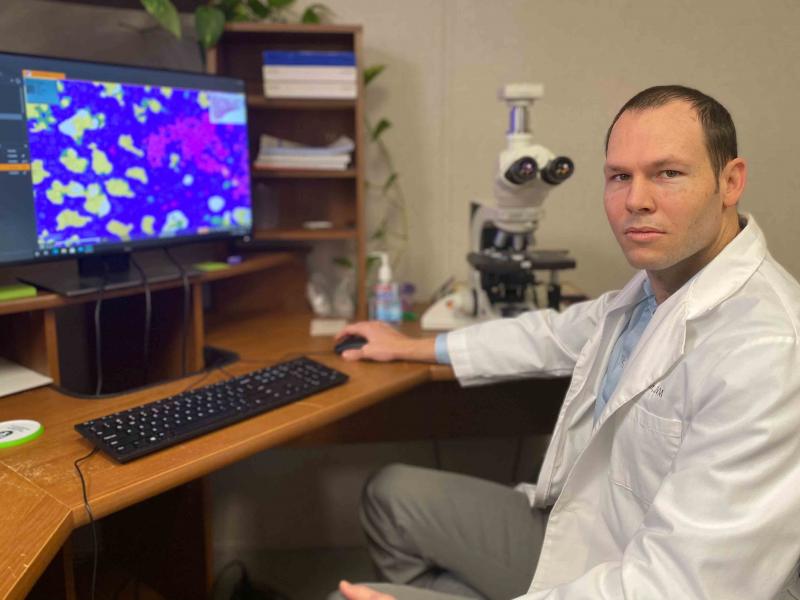 Veterinary pathologist and corresponding author Robert Blair said that this is the first time scientists have observed ARDS in a nonhuman primate model of COVID-19. Photo by Leslie Tate.

For the first time, Tulane University researchers have identified and replicated a little understood, hyperimmune response in nonhuman primates that could one day lead to treatments to rescue patients with severe cases of the disease. The findings were published in The American Journal of Pathology.

“This may be an important first step in understanding why some people become critically ill from COVID-19,” said senior author Jay Rappaport, director of the Tulane National Primate Research Center. “Once we understand that, we will be better equipped to treat them.”

Most of the more than 2 million deaths caused by severe COVID-19 are the result of a hyperimmune response in the body that can rapidly cascade into respiratory failure.

Veterinary pathologist and corresponding author Robert Blair said that this is the first time scientists have observed ARDS in a nonhuman primate model of COVID-19.

“Although severe disease is only seen in a small subset of those infected with SARS-CoV-2, it is this outcome and our minimal understanding of it that has resulted in global unrest and the deaths of nearly 2 million people worldwide,” Blair said.

Treatments for severe COVID-19 must be evaluated for safety and effectiveness in animals before being used in the human population and that can only occur if an animal can faithfully reproduce, or model, the full spectrum of disease as humans experience it.

The early results of the Tulane study indicate that the African green monkey may be a highly useful model to test therapeutic strategies that can prevent or lessen severe disease in SARS-CoV-2 infected patients.

ARDS is the hallmark sign of severe SARS-CoV-2 infection, a condition which makes it difficult for patients to breathe and hard for doctors to treat.

Subjects also developed a severe inflammatory response known as cytokine release syndrome, or “cytokine storm.” Cytokine storm occurs when a large number of cell-signaling proteins are released together, including the cytokine IL-6. Critically ill COVID-19 patients who develop ARDS experience elevated IL-6 levels. Together, ARDS and cytokine storm are indicative of a runaway immune system in a subject whose inflammatory response is causing more harm than good.

A variety of animal species have been evaluated by researchers in an attempt to understand what happens in the human body when infection with coronavirus does not present as a mild infection, as it does in 80% of cases, but instead produces the kind of severe disease that leads to hospitalization and death. But most animals, like humans, only present with mild to moderate disease.

This research was a unique collaboration of many scientists and specialists at the Tulane National Primate Research Center including those in veterinary medicine, aerobiology, biosafety, and comparative pathology.