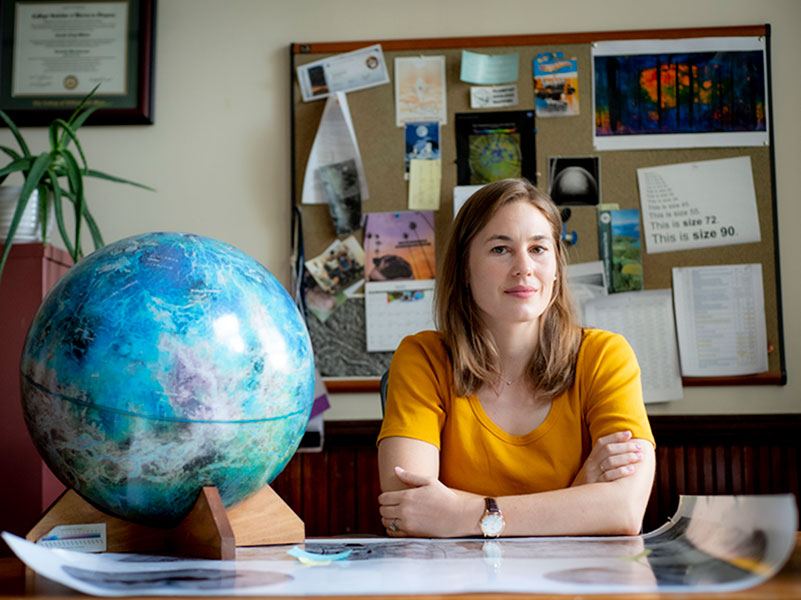 Jennifer Whitten, a planetary scientist in the Tulane Department of Earth and Environmental Sciences, has been researching the planet Venus for the past six years. (Photo by Paula Burch-Celentano)

A Tulane University planetary scientist is one of 30 scientists from across the United States and Europe who will be part of a NASA mission to Venus, Earth’s nearest neighbor.

Jennifer Whitten, an assistant professor in the Department of Earth and Environmental Sciences, will serve as associate deputy principal investigator on the VERITAS team as it circles the fiery planet.

The VERITAS spacecraft will be launched on a rocket, then released into space, where it will cruise for approximately six months before entering orbit around Venus and then slowing down until it reaches the desired altitude above the planet’s surface, Whitten said.

"I cannot wait to see what secrets Venus will reveal. Whatever they are, it’s going to be exciting.”

“Then we will start making measurements of the surface with the instruments onboard the VERITAS spacecraft,” she said. “From launch to the end of data collection, the mission is planned to take approximately five years, and that does not take into account all the work that has to happen beforehand. I cannot wait to see what secrets Venus will reveal. Whatever they are, it’s going to be exciting.”

The mission is one of two selected by NASA to explore how Venus became an inferno-like world despite so many similarities to Earth. VERITAS and DAVINCI+, the second selected mission, will be the first missions NASA sent to Venus since the 1990s. The missions are expected to launch between 2028 and 2030.

VERITAS (Venus Emissivity, Radio Science, InSar, Topography and Spectroscopy), which is being managed by NASA’s Jet Propulsion Laboratory in Southern California, will map Venus’ surface to determine the planet’s geologic history and understand why it developed so differently than Earth.

“We want to characterize this divergence to better understand what makes a habitable planet. With VERITAS, we are striving to understand how planets evolve to have these characteristics that can support life and how the planet evolved away from hospitable conditions,” Whitten said.

Orbiting Venus with a synthetic aperture radar, VERITAS will image the surface of Venus, measure elevation over nearly the entire planet and determine the rock types in the crust to confirm whether processes such as plate tectonics and volcanism were ever active on Venus.

Whitten, who has been researching Venus for six years, said she was asked to participate on VERITAS in 2018 as the team was preparing to submit its mission proposal to NASA.

“Being part of a mission team from the start is an incredible experience,” Whitten said. “I've had the privilege of seeing how a mission proposal is put together and will now get to observe the construction and assembly, launch, orbit insertion and data collection and analysis. This is an invaluable experience for my career as I am interested in continuing to participate in mission science.”

VERITAS and DAVINCI+ (Deep Atmosphere Venus Investigation of Noble gases, Chemistry, and Imaging) were chosen based on their potential scientific value and the feasibility of their development plans. The project teams, each of which receives $500 million, will now work to finalize their requirements, design and development plans.