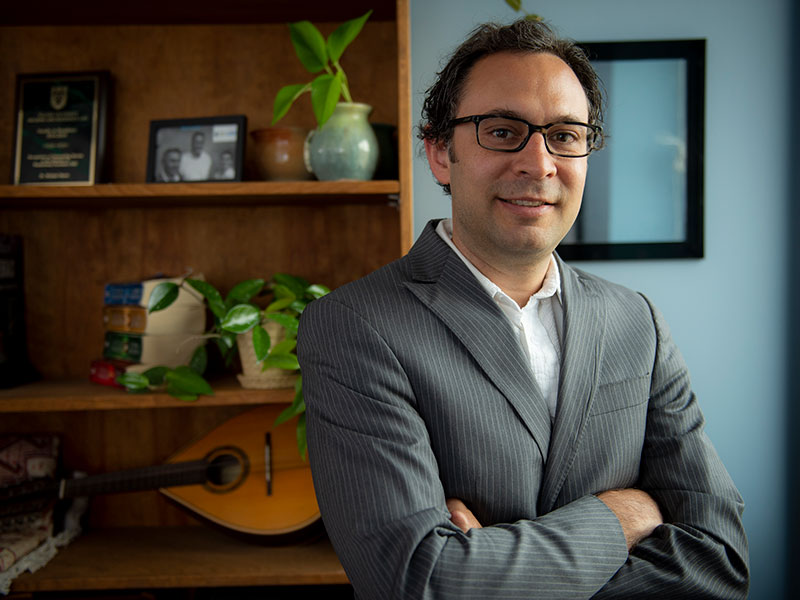 Michael J. Moore’s work is among dozens of research projects taking place across the United States as part of HEAL, a $945 million effort to provide scientific solutions to the national opioid overdose crisis. Photo by Paula Burch-Celentano

In 2019, nearly 50,000 people in the United States died from opioid overdoses, bringing the total of number of deaths from the opioid crisis to half a million over the past 10 years, according to the U.S. Centers for Disease Control.

Michael J. Moore, a professor of biomedical engineering at Tulane University School of Science and Engineering, is part of a national study that aims to turn those statistics around by creating a living bioengineered nerve circuit that mimics the pain transmission pathway in the spinal cord. The circuit of living cells, which is designed to help scientists test the effectiveness of non-addictive alternatives to opioid painkillers, is highlighted in the prestigious journal Science Advances.

“We show that this model system behaves physiologically similar to the circuit that carries the pain signal, and we show that it responds to pain drugs, like morphine and lidocaine, in ways that are reproducible and measurable and distinct for each type of drug,” Moore said. “What we hope is that we will be able to use this model system to more quickly identify possible candidates for new pain killers, which right now can only be done through an arduous series of behavioral studies with animals.”

The study is his first paper under the HEAL Initiative, or Helping to End Addiction Long-term Initiative, a $945 million, multi-university funding endeavor sponsored by the National Institutes of Health.

“This is the first paper detailing our work on this project, and it was all done here in my lab to demonstrate how this model could work in preparation for a wider collaborative effort.”

HEAL was launched in April 2018 to provide scientific solutions to the national opioid overdose crisis, including improved treatment strategies for pain as well as opioid use disorders (OUDs). Funded by Congress, the initiative involves numerous universities and almost every NIH institute and center in order to approach the crisis from all angles and disciplines.

“This is the first paper detailing our work on this project, and it was all done here in my lab to demonstrate how this model could work in preparation for a wider collaborative effort,” Moore said.

Moore’s co-authors on the paper are Kevin J. Pollard, a post-doc in Moore’s lab; Devon A. Bowser, a PhD student who graduated from the Bioinnovation program in 2019; Wesley A. Anderson, a scientist at AxoSim, a Tulane spinout where the research initially began; and Mostafa Meselhe, a biomedical engineering student who graduated from Tulane in 2020.

He is continuing to work with Randolph Ashton, an associate professor of biomedical engineering at the University of Wisconsin, and Swaminathan Rajaraman, an assistant professor of electrical and computer engineering at the University of Central Florida. Ashton is developing human stem-cell derived spinal neurons, and Rajaraman is developing specially-made microelectrodes for taking electrical measurements from the cells.

Moore’s Tulane collaborators include Jeffrey Tasker, the Catherine and Hunter Pierson Chair in Neuroscience, and James Zadina, director of the Neuroscience Laboratory at the Veterans Administration Medical Center and an adjunct professor of medicine at the Tulane School of Medicine.

“We expect to receive three more years of funding any day now,” Moore said. “In this next phase of the project, we will seek to better characterize the physiology of our model system, improve its physiological relevance and determine whether we can mimic some of the biological processes associated with drug tolerance.”