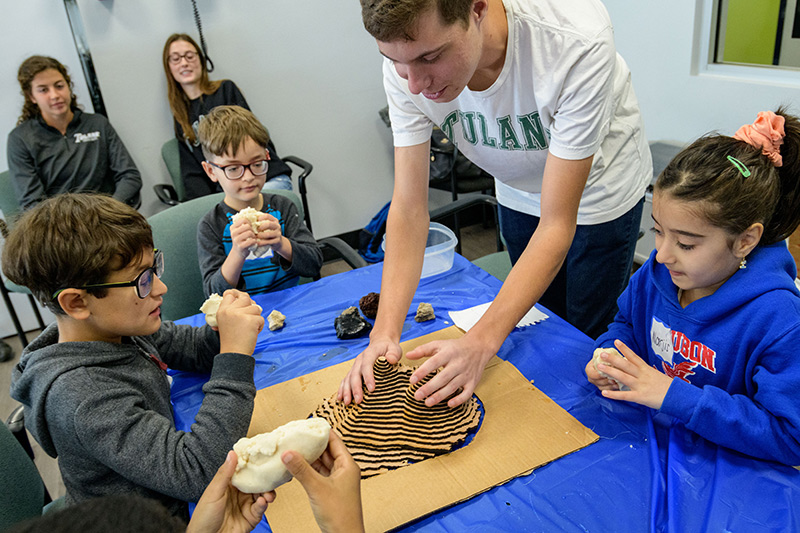 Tulane geology student George Pratt uses a cardboard model to mimic a volcanic mountain as visually impaired and blind children from Louisiana Lighthouse feel the series of layers and add play dough to demonstrate how lava flows over the layers. (Photo by Matthew Hinton)

“On my way out the door to do outreach, and I’m very nervous,” Gasparini tweeted the morning of Nov. 9 as she and her students prepared to share their love of earth sciences with visually impaired children. “My 7-year-old says, ‘I hope your invention works.’ Confidence up just a bit.”

Three hours later, Gasparini and four of her students, George Pratt, Kristina Leggas, Jenni Riggen and Haily MacDonald, were practically celebrating. Not only had their lessons gone off without a hitch, but their young students at Louisiana Lighthouse (formerly Lighthouse for the Blind) didn’t want the activities to end.

"This was my first experience teaching in a classroom setting, but I really enjoyed teaching the kids and also learning from them."

And why would they, considering they spent the morning feeling and touching models of volcanoes, waves and other natural phenomenon, some of which involved whipped cream, wet sand and play dough.

The project is part of a $230,600 National Science Foundation grant that Gasparini and her team of undergraduate and graduate students will use to study how soil is produced in different environments.

“The depth of soil is likely closely linked to the soil production rate and how rivers erode,” she said. “How rivers and soils interact has practical consequences for river infrastructure and human impacts on landscapes such as deforestation or forest fires.”

Gasparini included service learning — an academic requirement for all Tulane students — in the project to help special needs children experience different forms of topography and soil. The project involved using 3-D printers at the Scot Ackerman Makerspace at Tulane to create synthetic landscapes that would be used to simulate volcanoes, tsunamis and earthquakes.

“The students were worried about being able to hold the attention of the kids,” said Gasparini. “But the kids absolutely loved the experience.”

George Pratt, a senior majoring in geology and anthropology, led an activity based around examining volcanic rock samples and discussing how they were formed. He made a model of a volcano using stacked laser-cut plywood, and he taught the children about lava flow by having them mold homemade play dough around the sides.

“If there was one thing that was challenging, it was conveying information in a way that visually impaired kids could understand. But they asked a lot of questions, and I could tell they were having a good time.”

Kristina Leggas’ project centered around surface waves. She created a wave tank incorporating sand and water, inviting the children to feel the materials as she explained how waves move over different types of soils and surfaces.

“I just had to use different prompts and focus on the sensation of touch instead sight,” said Leggas, a junior majoring in environmental science. “Watching them get excited about science made it all worth it.”

Gasparini, who led an earthquake activity using graham crackers and Cool Whip, couldn’t have agreed more. In a tweet following the workshop, she described the experience as a privilege. “I almost started crying when one of the kids said, ‘I wish I could stay here all day.’ “ 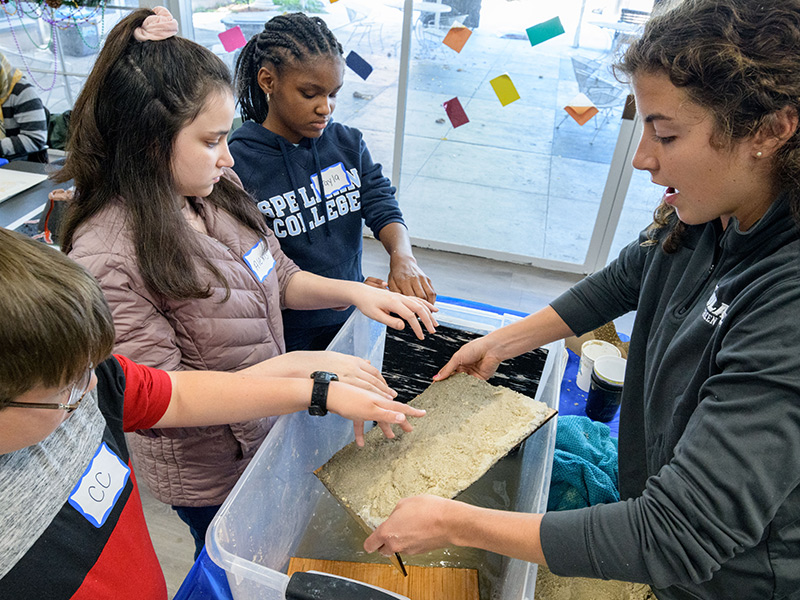