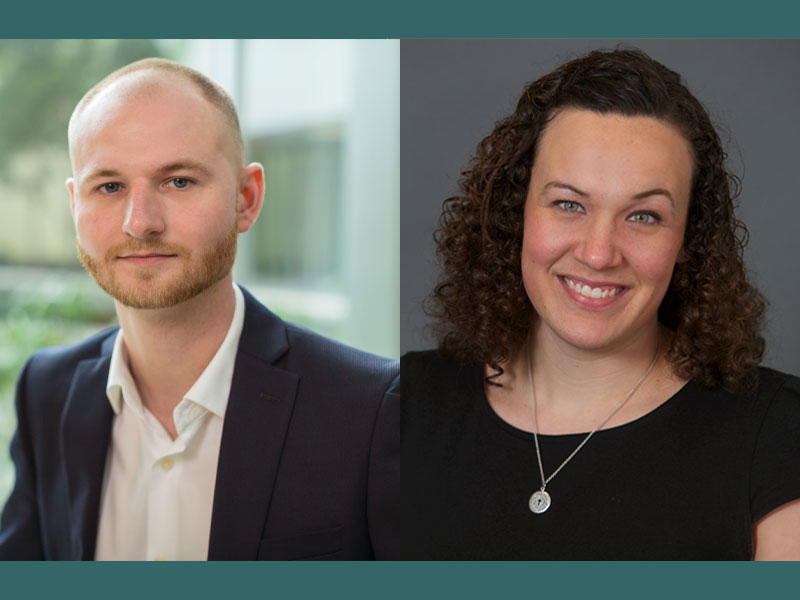 Tulane alumnus Nicholas Pashos, left, is teaming up with Tulane scientist Kristin Miller to improve treatment for women suffering from pelvic organ prolapse. Pashos is the founder and CEO of the Tulane spin-out company BioAesthetics.

BioAesthetics, whose CEO and COO are both Tulane graduates, is collaborating with Tulane researcher Kristin Miller, an associate professor of biomedical engineering whose lab will conduct the testing of the graft.

The grant is part of the National Institutes of Health Small Business Innovation Research (SBIR) program, which funds research that has strong potential for technology commercialization.

“The suboptimal surgical outcomes (of pelvic organ prolapse) are largely due to the fact that the female reproductive system is drastically understudied."

Approximately 12 percent of all women with the condition will need surgery for POP, the goal of which is restore organs to their original positions. The procedure typically uses stitches, synthetic mesh implants or grafted tissue to provide support.

However, surgical success rates are low, with over 40 percent of vaginal POP surgeries using native tissue failing within two years. Synthetic meshes carry significant safety risks including chronic infection, nerve and tissue damage, and genital tearing; these risks are so serious that the use of surgical mesh was recently banned in the United States and several other countries.

“The suboptimal surgical outcomes are largely due to the fact that the female reproductive system is drastically understudied, limiting the ability of engineers to design effective treatments that match the properties of healthy tissues within the pelvic floor,” said Miller, who was recently awarded the 2021 ASME Y.C. Fung Early Career Award for her contributions in advancing the bioengineering fields’ understanding of the female reproductive system.

BioAesthetics’ novel graft, which is an acellular biologic graft strengthened with biodegradable, biocompatible polymers, will be tested in Miller’s lab to compare its elasticity and strength to that of normal tissue found in the pelvic floor and to evaluate the healing and performance of the graft in a rodent model.

“We are extremely excited to collaborate with Dr. Miller to test our novel biomaterial graft for the treatment of POP. Her expertise in the field is critical to properly evaluating the technology and advancing ultimately to the clinic to improve the quality of life for those suffering from POP,” said Nicholas Pashos, PhD, founder and CEO of BioAesthetics and principal investigator of the SBIR grant.

BioAesthetics’ mission is to transform lives through advancements in biomaterials. Its first product is an acellular graft for regenerating the nipple and areola for breast cancer patients who have undergone mastectomy. The company is developing additional next-generation grafts for POP, burns and pressure ulcers to improve treatment outcomes and patients’ quality of life.