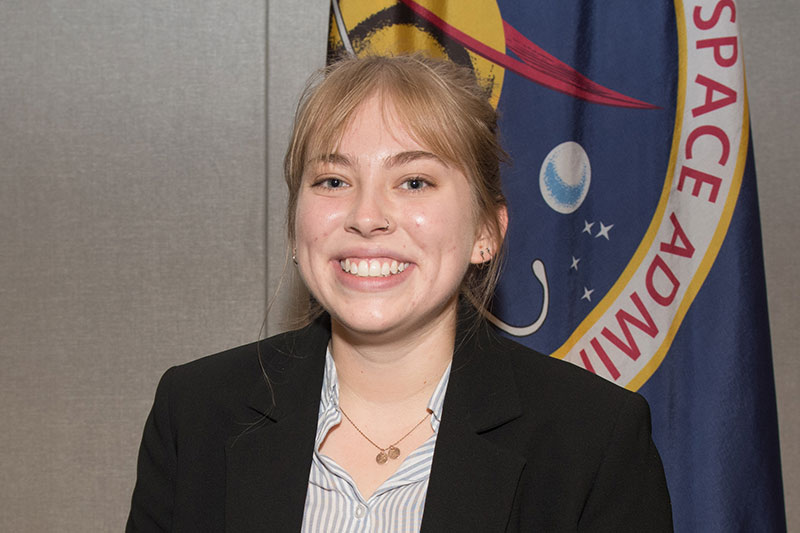 Meghan Bush, an engineering physics senior at Tulane University, would like to work at NASA one day, and if her recent experience at the NASA Glenn Research Center in Cleveland is any indication, NASA would be lucky to have her.

Bush, interning in the Photovoltaic and Electrochemical Systems Branch, bested 200 other interns to win the first GlennTalks Live competition, sponsored by Glenn’s Office of Education.

Bush won for her project "Characterizing Photovoltaics in a Near-Space Environment." A panel of NASA professionals based their decision on “who could best demonstrate confidence and ability to communicate the background and significance of their summer project and its relevance to NASA’s mission.”

“Long term, I would like to work as an engineer in the field of space photovoltaics and hopefully contribute to NASA's future Mars missions.”

“I was very honored to win the first-ever GlennTalks Live competition,” said Bush, a native of Lafayette, Louisiana. “This was the most important presentation I've ever given, and I was very excited to bring home a win for the Photovoltaics team that I was working with this summer.”

Photovoltaics are materials — such as solar cells — that generate electricity from light. Many spacecraft and satellites rely on large space solar arrays for power, so it's necessary to do extensive testing on the cells before launch. However, Bush said, it is time-consuming and expensive to launch anything into space, and most materials launched to the ISS (International Space Station) are not retrievable.

“One solution to this issue is flying solar cells on high-altitude research planes like the ER-2,” she said. “The ER-2 is an old spy plane that has been retrofitted as part of NASA's Airborne Sciences program. The plane can reach an altitude of over 70,000 feet, which is considered a near-space environment with conditions nearly identical to what the arrays would be exposed to during their missions.”

Her project was the assembly and design edits of the ER-2 pod, which mounts to the wing of the plane and has an open viewport for direct solar exposure during flight.

“Through the ER-2 pod, a means to a faster and cheaper method of photovoltaic characterization, NASA Glenn (Research Center) is solidifying solar array's importance to NASA's ongoing mission of space exploration and discovery,” Bush said.

Bush, president of the Tulane Society of Women Engineers, credits her NASA mentors with helping her make it to the top five in the GlennTalks competition and ultimately to first place. She said she hopes the experience eventually leads to a career at NASA, though not right away.

After graduation, Bush plans to stay at Tulane another year to work on her master’s degree and continue her research on 2-D materials in assistant professor Matthew Escarra’s lab. She may eventually pursue a PhD.

“Working at NASA has been a dream of mine for many years,” she said. “Long term, I would like to work as an engineer in the field of space photovoltaics and hopefully contribute to NASA's future Mars missions.”

Matthew Barrios, a professor of practice in the Tulane Department of Physics and Engineering Physics, has no doubt that Bush will make her mark in the aerospace field.

“With her combination of soft skills and technical experience, Meghan has the potential to be highly successful in engineering or wherever her career takes her. I’d say the sky is the limit, but, given her passion for aerospace, that wouldn’t be strictly true.”