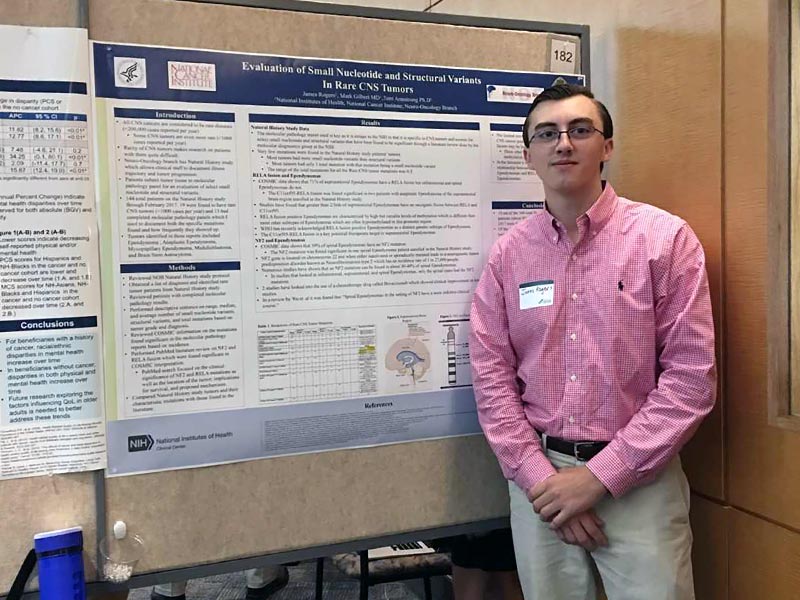 A rising sophomore at Tulane, James Rogers spent his summer as an intern at the National Institutes of Health where he conducted research on the total number of mutations found in a small subset of rare central nervous system tumor patients. (Photo by Nicole Leggiero)

Tulane rising sophomore James Rogers made the most of his summer in a big way.  Rogers was selected for an internship at the National Institutes of Health (NIH) and worked in the Neuro-Oncology Branch (NOB) of the National Cancer Institute (NCI).

Rogers’ research focused on the total number of mutations found in a small subset of rare central nervous system (CNS) tumor patients.  He completed the project based on data obtained from a current study.

“The research I did was foundational in that to understand how rare tumors like Ependymoma come about one must first understand how mutated the tumor is,” Rogers said.  “I found that most of the rare tumors studied were not highly mutated with most tumors only having about one total mutation.”

“The research I did was foundational in that to understand how rare tumors like Ependymoma come about one must first understand how mutated the tumor is.”

According to Rogers, this discovery is important as it points to the possibility that other factors such as DNA methylation or epigenetics could be leading to the development of these tumors. In the upcoming months, the NIH will begin a Rare Tumor Patient Engagement Network as part of former Vice President Joe Biden’s Cancer Moonshot Project, which aims to accelerate cancer research. The research Rogers completed will provide a framework for understanding how mutated the tumors are and what the next steps to understanding them may be.

Located in Bethesda, Md., NIH is the largest biomedical research facility in the world.  During his eight-week internship, Rogers worked under the direction of Terri Armstrong, who heads the patient outcomes team at NOB.

“James worked on a project compiling data on mutation status of very rare central nervous system tumors,” Armstrong said.  “Whereas we have identified mutations in the more common CNS tumor, gliomas, it has been more difficult for exploration in these tumors (with an incidence less than 1,000 per year), to begin to identify mutations that may be driving the occurrence or progression of these tumors.

“This preliminary work was important to a new initiative within the intramural NCI program. We will work to directly engage with patients with these rare tumors, further evaluate these mutations and work to develop targeted treatments,” Armstrong added.