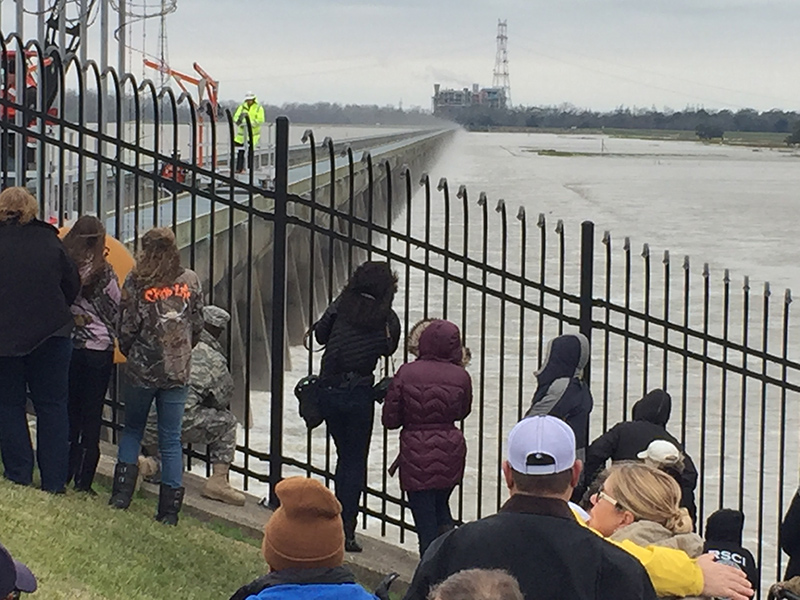 Onlookers gather to watch the January 2016 opening of the Bonnet Carré Spillway in St. Charles Parish. (Photo by Jacques Hebert of the Environmental Defense Fund)

In response to an unprecedented four openings of the Bonnet Carré Spillway in the last five years and with the possibility of more climate-driven river floods, a new Tulane University study has demonstrated the efficacy of upper river diversions as a means to improve river management and reduce the volume of water flowing through the spillway.

The Bonnet Carré Spillway, located in St. Charles Parish, allows flood waters from the Mississippi River to flow into Lake Pontchartrain and then into the Gulf of Mexico. It has been opened 16 times since its construction in 1937 — four times since March 2018. In 2019, an unprecedented volume of water was released through the structure, nearly 31 million acre-ft (which means that 31 million acres area covered with 1 foot of water).

Opening the spillway relieves pressure on levees that protect about one million people in southeast Louisiana from flooding and allows the Corps to maintain river stages and regulate river flow downstream from the spillway.

"Every time it operates, especially if it operates in the summer or late spring, when temperatures are high, there is an impact on water quality.”

Ehab Meselhe, professor in the Tulane Department of River-Coastal and Science Engineering

The Tulane study was conducted by Ehab Meselhe, a professor in the Department of River-Coastal and Science Engineering who helped build numerical models used in Louisiana’s 2012 and 2017 Coastal Master Plans.

He said environmental challenges resulting from the recent and frequent operation of the spillway by the U.S. Army Corps of Engineers underscores the urgency of identifying alternatives to improve river management and confront the new normal of more frequent river floods, including solutions to reduce the magnitude and duration of spillway openings with effects on wildlife, seafood production, coastal communities and economies.

“And every time it operates, especially if it operates in the summer or late spring, when temperatures are high, there is an impact on water quality.”

Science indicates that climate change might cause more frequent floods on the Mississippi River, requiring more regular openings of the Bonnet Carré Spillway. To confront this new normal, Restore the Mississippi River Delta, a group of nonprofit conservation organizations asked Meselhe to explore solutions for improving river management that are currently proposed as part of Louisiana’s Coastal Master Plan. Meselhe modeled how three river diversions planned north of the Bonnet Carré Spillway can be operated to relieve pressure and reduce the volume of water flowing through the spillway, while also restoring coastal ecosystems. The organizations include Environmental Defense Fund, which funded the study, along with Lake Pontchartrain Basin Foundation, the National Wildlife Federation, Coalition to Restore Coastal Louisiana, and National Audubon Society.

The study — the first of the phases — uses digital models to simulate several diversions as possible flood control outlets. They include Ama North, Ama, Union and River Reintroduction in Lake Maurepas. Due to its small size, Maurepas had little impact but Ama North and Union, both individually and jointly, resulted in a noticeable reduction to the magnitude of the Bonnet Carré pulse.

Specifically, when the Ama North and Union diversions are operated jointly, the reduction in the flow volume released through the BCS ranged between 57 percent and 61 percent, while reducing the duration of the opening from 143 days to 96 days.

The second part of the study will be a basin-side analysis designed to capture and quantify the potential benefits of using the upper river diversions as flood control outlets. The goal of such an analysis will be to examine the impact of the water quality and the potential environmental benefits to the wetlands and estuarine systems.

Ideally, the results of the study will be presented to Congress, which would have to support other scientifically defensible options as possibilities to better manage the river, Meselhe said.

“We completely understand the way the Corps of Engineers operates Bonnet Carré, and this study is not meant in any way at all to criticize the Corps” Meselhe said. “We are simply saying, ‘why not combine flood control objectives with ecosystem restoration opportunities-- a win-win.”