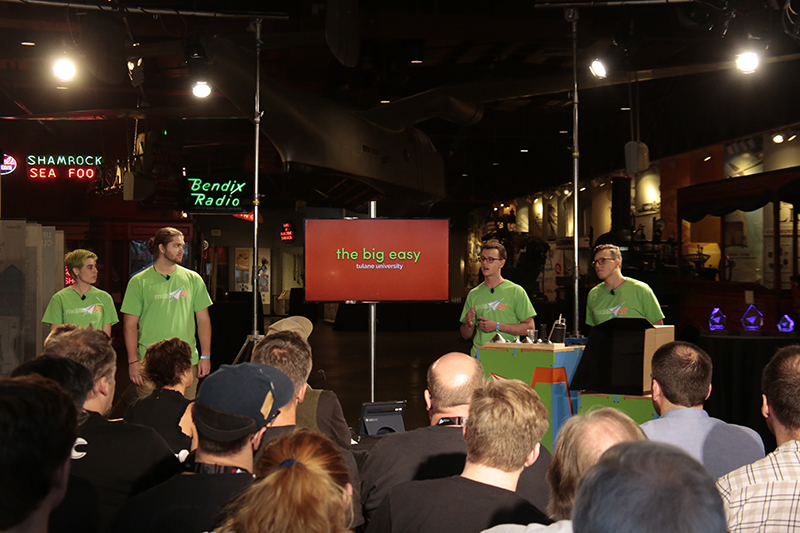 A Tulane team selected to compete in the APT/PBS reality show “Make48” may take home a top prize. But you’ll have to tune in to see just what the team invented and where it placed out of 12 national collegiate teams.

Billed as the “world’s fastest invention competition,” “Make48" is a MakerSpace-inspired show in which student teams have 48 hours to plan, prototype and pitch a new commercial product idea to a panel of judges. The top three teams have a chance for their products to go to market, with the process filmed in a documentary-style TV series at the Stanley Black and Decker Innovation Lab near Baltimore.

The 10-episode series, which was filmed in 2018, is streaming on PBS.org, and the first episode is now available. It will also air on WLAE and some WYES digital channels but those dates were not immediately available.

"Watching the different teams, with different ideas, all work towards the same end point was a confirmation that a MakerSpace serves a vital role at many universities.

“Being on the show was wild, it felt like a blur,” Rubinstein said. “You’re so focused on this one project for 48 hours, and there’s always stuff to do and not enough time.”

The product category for which the Tulane team, dubbed The Big Easy, had to brainstorm and design was emergency preparedness. They spent one afternoon developing ideas, then the next morning visited an Ace Hardware to buy supplies and materials. A team of technicians from Black and Decker was on hand to assist with their prototypes, and a video production group helped them prepare their pitch presentations.

“All of this had to be completed in 48 hours,” said team advisor Cedric Walker, professor emeritus of biomedical engineering and director of the Scot Ackerman Tulane MakerSpace.   “The 12 teams then presented their functional prototypes, along with a market analysis and a pitch, to judges at the Baltimore Museum of Science and Industry.

“Seeing the Tulane team coalesce under intense time pressure was the best part of my trip to Baltimore with them. And watching the different teams, with different ideas, all work towards the same end point was also a confirmation that a MakerSpace serves a vital role at many universities.”

At the Tulane MakerSpace, students have access to digital fabrication tools like 3D printers, laser cutters, a water jet cutter, computer-controlled milling machines and lathes. It caters to a wide variety of student majors from engineering to art to anthropology.

Rubinstein said her experience with the Tulane MakerSpace prepared her well for the competition as did the business and design classes that she and her teammates took leading up to the show.

“I got a lot out of the whole experience,” she said. “I got to work with an amazing group. I think we all worked together, finding a good mix of being able to divide up tasks as well as finding some time to take a quick break.”

She was as impressed with the other teams as she was her own. “It was amazing to see all the other brilliant minds at play and the ideas that others came up with and how everyone saw the issue.”