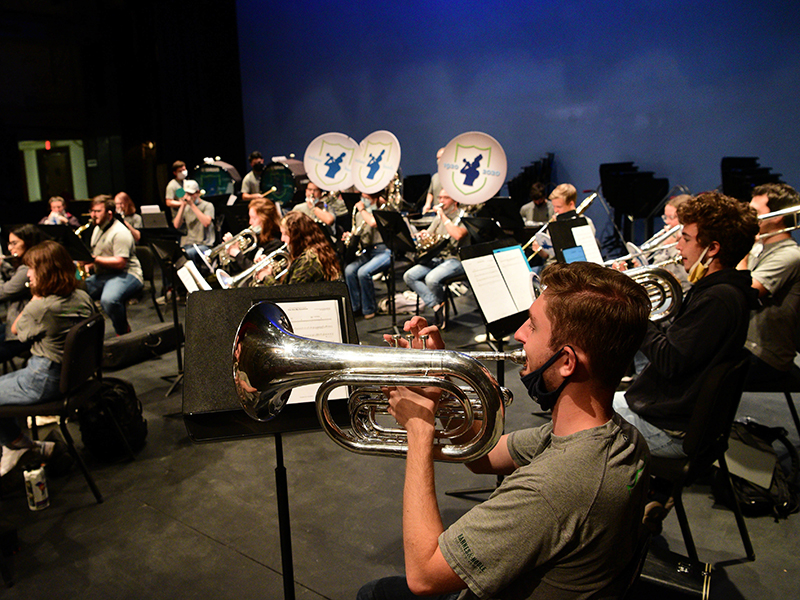 The Tulane University Marching Band will showcase New Orleans music when it performs at the World Expo next month in Dubai. (Photo by Cheryl Gerber)

Thirty-one members of the Tulane University Marching Band are preparing for the trip of a lifetime.

The group will be traveling nearly 8,000 miles to play at the 2020 World Expo in Dubai, which was postponed from last year due to the COVID-19 pandemic. They will take the stage Nov. 28—the Sunday after Thanksgiving—as the only college band to perform on U.S. National Day. Formerly known as the World’s Fair, the six-month Expo began Oct. 1 and will run through March 31, 2022. It will showcase innovation and culture from 192 countries, with 25 million visitors worldwide expected to attend.

The official invitation to perform at the Expo came in a letter from Anthony Pahigian, senior advisor for International Expositions at the U.S. Department of State.

"As one of the most creative cities in the world, New Orleans is a global cultural capital. Our marching band reflects and celebrates our city’s place on the world stage."

Brian Edwards, dean of the Tulane School of Liberal Arts

“We are particularly delighted to feature the presentations of the Tulane Band, blending the traditions of American marching bands with the contemporary style, repertoire and flair of New Orleans and Louisiana culture,” Pahigian wrote to Tulane Director of Bands Barry Spanier.

The U.S. Pavilion is providing airfare, hotel and per diem for 20 people, and Spanier is working with prospective sponsors to secure funding for 14 additional band members and staff.

With a resume that includes music director stints at the 2000 Summer Olympics in Sydney, the 1984 Summer Olympics in Los Angeles, the World Expo 88 in Brisbane, Australia, and countless music festivals throughout the United States, Spanier is bringing a breadth of performance experience to this trip.

“Our performance show emphasizes the incredible music and culture of New Orleans and the city’s influence on American popular music,” Spanier said. “The show will also embody the spirit of New Orleans and Louisiana—there will be a lot of audience engagement, opportunities to get up and dance, moments of reflection and lagniappe giveaways.”

In addition to performing the Louisiana state song “You Are My Sunshine” for their custom Expo show, the Tulane Band will also play classic rock ‘n’ roll songs by Louisiana artists Fats Domino and Jerry Lee Lewis, contemporary works by New Orleans native Jon Batiste and other pop musicians, and traditional songs written and performed by New Orleans brass bands and Mardi Gras Indians. On U.S. National Day, the band will perform “The Star-Spangled Banner” at a flag-raising ceremony and lead a parade through the Expo site. They may also have other performance opportunities, including opening for a major American act.

While Expo programming is centered more broadly on collective action to address the world’s most critical challenges and opportunities, from climate change to connectivity, the U.S. Pavilion will focus on promoting prosperity, opportunity and innovation globally and domestically with the theme of “Life, Liberty and the Pursuit of the Future.”

The U.S. Pavilion learned about the Tulane Marching Band through former band member Kyla Denwood, who graduated from Tulane in May 2021 and subsequently began working as a Youth Ambassador for the U.S. Pavilion.

“Kyla recommended the State Department contact me because I had produced and directed music and bands at World Expo 88 in Australia,” Spanier said. “One of their objectives is to have increased involvement and representation from the southern states at the U.S. Pavilion, and our marching band from New Orleans fits that vision.”

Once he received the official invitation, Spanier brought the idea to Brian Edwards, dean of the Tulane School of Liberal Arts, and Dusty Porter, vice president of student affairs, both of whom approved wholeheartedly.

“I am particularly proud that TUMB has been asked to represent New Orleans and the United States at the World Expo Dubai. As one of the most creative cities in the world, New Orleans is a global cultural capital. Our marching band reflects and celebrates our city’s place on the world stage,” Edwards said. 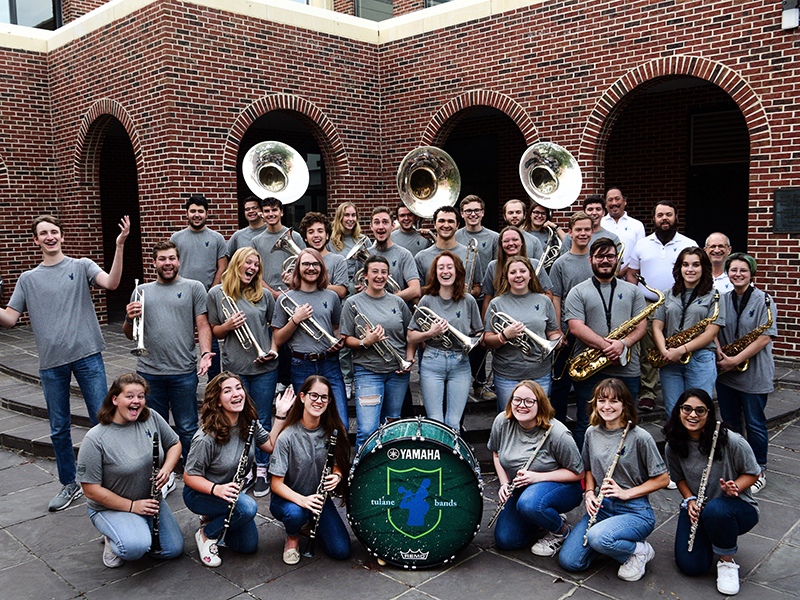 Thirty-one members of the Tulane University Marching Band will perform at the 2020 World Expo in Dubai. (Photo by Cheryl Gerber)