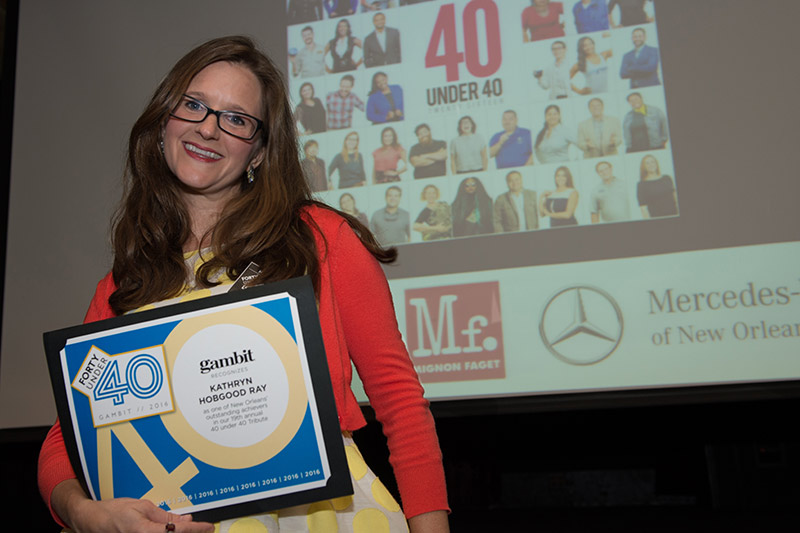 Assistant director of marketing and communications at Tulane University and founder of children’s musical group the Confetti Park Players, Katy Hobgood Ray attends a banquet honoring those appearing on this year’s ‘Gambit Weekly’ 40 Under 40 list. On Friday, Dec. 23, catch Ray and the Confetti Park Players performing at Celebration in the Oaks in City Park. (Photo by Sally Asher)

Born in Bogalusa, Louisiana, Ray grew up in a music-filled household and gained an affinity for local oral tradition from her grandmother, folklorist Gypsy Damaris Boston.

“One of the best things about our group is the interesting mash-up of kids’ voices and notable New Orleans musicians and characters.”

In 2013, Ray received a master of arts degree in musicology from the School of Liberal Arts. That year, Ray also began holding impromptu sing-along sessions with children from her Algiers Point neighborhood, introducing them to both folk tunes and fun original songs inspired by Louisiana’s rich culture.

“Being a mother turned my interest toward the childhood experience. I started collecting children’s music from Louisiana when Louis was born, and I've enjoyed sharing these songs with my son and the kids in my neighborhood.”

After securing space to practice at a local church, Ray organized the group as the Confetti Park Players, performing alongside them publicly for the first time at the Algiers Folk Art Fest in October 2014.

The group has since grown to include 30 kids, who also regularly contribute to Ray’s Confetti Park podcast, which features interviews, local author story time and in-studio performances.

“Our collaboration with Mr. Okra is, to me, destined to be an important piece of New Orleans sound someday. It just turned out so magical,” said Ray.