‘You are more than your resume’ 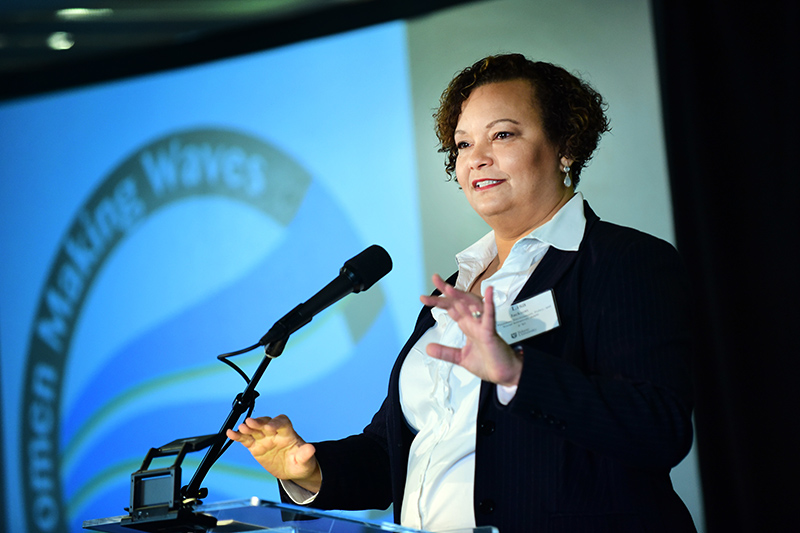 Jackson spoke to more than 250 attendees about her own path of resilience in line with the conference theme “Building Success Through Resilience.”

A recurring theme in Jackson’s speech was the importance of creating a network of family, friends and co-workers who support you. This also means being a source of support for others, she said.

“One of the better trainings for management that I had was motherhood.”

As a mother of two sons, Jackson spoke about her experience building a career while being a parent. The two experiences, she said, were mutually beneficial.

“One of the better trainings for management that I had was motherhood,” said Jackson. “Aspects of parenthood such as conflict resolution and patience can easily be applied to the boardroom.”

Jackson grew up in New Orleans’ Ninth Ward, attended St. Mary’s Dominican High School, graduated from Tulane and earned a graduate degree in engineering from Princeton University. She then went on to become administrator for the Environmental Protection Agency before landing at Apple, where she oversees the company’s environmental initiatives, reporting directly to CEO Tim Cook.

Jackson was among the first members of her family to attend college, and she acknowledges, “that was a result of resilience and power. These women never stated what was possible, but they also had that look in their eye saying ‘I’m not interested in you stopping where I am.’”

Jackson ended her keynote with an call to action, challenging attendees to forge their own paths. “There’s a humanity and a history to you that if you let it guide you will take you to some pretty amazing places. There is no one else that possesses what you have inside you right now. Remember that when you walk in a room, you are much more than the resume that brought you into that room.”