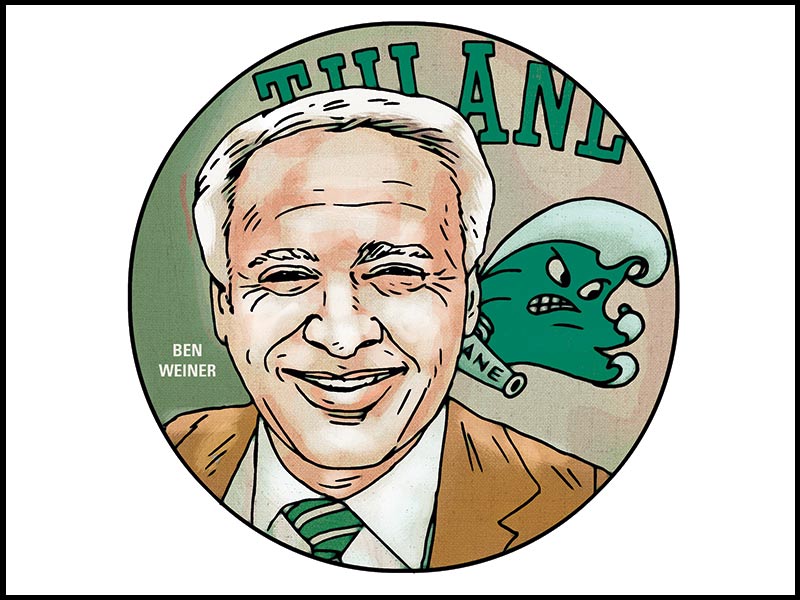 It snakes some four-tenths of a mile from the large avenue named for the first elected governor after Louisiana gained statehood in 1812, William Charles Cole Claiborne, to Willow Street, so named—hard to believe—for what was once a remote swampy area surrounded by weeping willows.

Like other roadways and edifices on campus, Ben Weiner Drive is named for one of Tulane’s great benefactors. Weiner is a name well known by the older Green Wave community for his generous support and love for the athletic department and his alma mater. So it’s the perfect designation for a street where Greer Field at Turchin Stadium (baseball), Wilson Athletic Center (athletic offices), Yulman Stadium (football) and Hertz Center (basketball and volleyball practice facility) are located.

Mr. Ben, or Ben, or Benny, as he was referred to, made his fortune in the furniture rental business, served as president of the Green Wave Club from 1974 to 1988, established the Ben Weiner Foundation and never missed a single Tulane home football game from 1924 through 1995, except for his years of military service. There’s no reason younger Tulanians, such as this year’s freshman class, could or should know all this, as they weren’t born when Weiner died in 1997.

But his military service is where they might be able to relate to this fine gentleman, sportsman and raconteur. Like many people of his era, Weiner served two years in the Army Air Corps during World War II. He was part of the 466th Bomber Group. Stationed in Norwich, England, the group flew 232 missions and was involved with the first raid on Berlin.

This column originally appeared in the December 2016 issue of Tulane magazine.