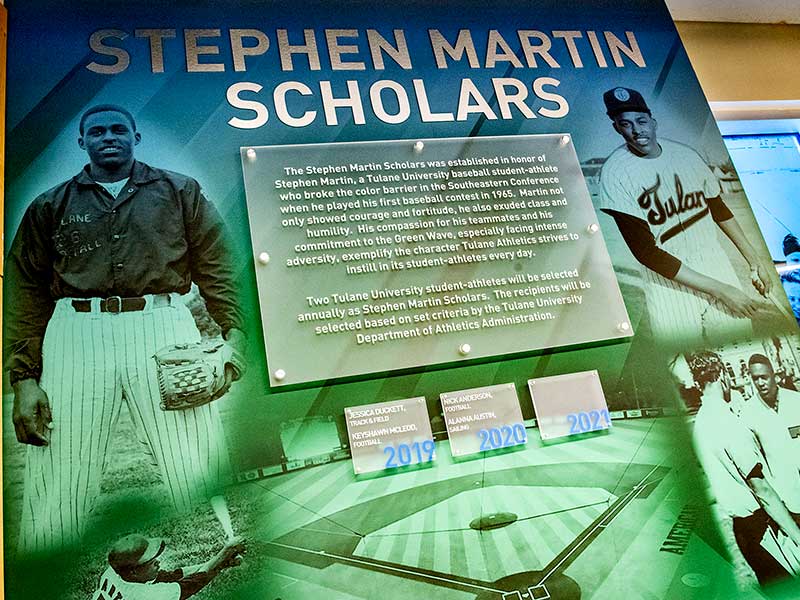 The Stephen Martin Scholars honor wall located in Yulman Stadium recalls the achievements of Tulane alumnus Stephen Martin as well as those students who uphold his legacy. (Photo by Paula Burch-Celentano)

A cherished figure in Tulane history, Martin died in 2013.

The university honors this Tulane Trailblazer with a recognition program named for him. Tulane student-athletes who receive this honor are known as Stephen Martin Scholars. An installation honoring Martin and bearing the names of the scholars is on view in Yulman Stadium.

The Stephen Martin Scholars excel academically and athletically and display leadership skills and civic participation. The program is in its second year. Scholars for 2019 included Jessica Duckett and Keyshawn McLeod; in 2020 Nick Anderson and Alanna Austin received the honor.

Martin’s son, Dr. Stephen Martin Jr., who graduated from Tulane with degrees from the College of Arts and Sciences and the School of Public Health and Tropical Medicine, recognized the importance of the program.

“The Stephen Martin Scholars have and will continue to make real and powerful differences in their communities and beyond,” he said. “These scholars truly reflect Stephen’s ideals of continuous learning and lifelong service and exemplify everything that Stephen stood and cared for, including being the best person that you can be in every situation, whether on or off the field.”

The installation will be updated every year with the names of the current scholars.

Tulane Trailblazers, which was launched by President Michael Fitts in 2019, celebrates individuals who have made Tulane University a more inclusive and diverse academic community. Read more about the Trailblazers initiative here.