Art, empire and the scholarly record 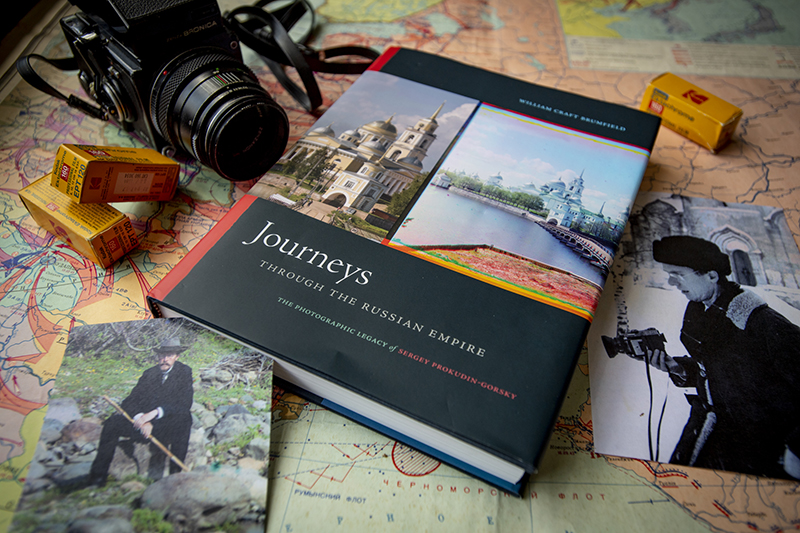 ‘Journeys Through the Russian Empire: The Photographic Legacy of Sergey Prokudin-Gorsky’ (Duke University Press, 2020) by School of Liberal Arts Professor William Craft Brumfield is an excellent new photographic appreciation of Russian architecture from behind two lenses. (Photo by Paula Burch-Celentano)

As much as a century separates the work of Prokudin-Gorsky (1863-1944) and Brumfield, who began researching the late photographer’s portfolio and studying his cache in the 1980s. Today, collections of both men’s photographs are housed in the Library of Congress. Brumfield’s book on Prokudin-Gorsky reveals a trove of photography of Russian architecture predating the revolution, and many of the same sites, captured again in the modern era by Brumfield himself.

By 1903, when Prokudin-Gorsky set out to explore Russia’s regions, he had already experimented in color photochemistry and developed a camera that took three exposures, each with a different color filter, in rapid succession. He traveled around Russia, photographing sites of interest, particularly churches and other religious buildings, usually in the employ of the Russian Ministry of Transportation and with the support of the monarchy.

“These photographs [are] not just objects of extraordinary beauty and visual power, but they also stimulate the reader to think about what happened during the intervening decades.”

When Brumfield, who teaches Slavic studies at Tulane, traveled to Russia in the 1970s and 1980s, he found himself photographing architectural sites. For the graduate student and then professor of Slavic languages and literature, “photography was an unusual extracurricular activity, but it soon became apparent that it was also a very powerful instrument,” Brumfield said. “Photography, for me, has been not only an art form, but also a scholarly record.”

Along the way Brumfield became familiar with the work of Sergey Prokudin-Gorsky, and sometimes ended up photographing the same sites that the Russian did.

After the publication of Brumfield’s first book in 1983 — he has since published 41 more — he began to see a through line: “I began to consciously think about the parallels between his work at the beginning of the 20th century and my work at the end of the 20th century,” he said. “The logic of his work to record Russia's heritage and the logic of my work were the same. Both he and I were committed to using the camera to record and interpret a very important part of Russia's cultural heritage.”

Journeys Through the Russian Empire is divided into eight geographic journeys that examine Prokudin-Gorsky’s travels through 1916. Readers need not be extensively educated about Russian history or architecture to appreciate the collection. For readers who need an introduction to Russian architecture or a different perspective on it, the dual photographic experiences of the Russian native and the modern scholar provide an immersive insider look.

The journeys wend through little-known towns like Belozersk and Rzhev, and the complexity of their churches and monasteries, full of tiny and intricate details, unfold like flowers before the eyes. Magnificent iconography, graceful “onion” domes, wildly colorful exteriors, and blended architectural styles keep the eye roving, with descriptions that provide historical context and artistic merit.

Photographs of some of these sites are juxtaposed so that the reader can contemplate each state of preservation, or neglect and decay, as well as how the buildings harmonize with the fabric of the countryside (Prokudin-Gorsky tended to avoid urban centers like Moscow).

Of the church Kazan Icon of the Virgin, in the 13th century town today known as Tutaev, Brumfield writes, “Built in 1758 in an archaic seventeenth-century parish style, the colorful, idiosyncratic structure has been beloved by generations of artists … its forms seem to cascade down the steep left bank of the Volga … Prokudin-Gorsky’s view conveys the church components in relation to the river. My photographs from the river give a sense of this ‘stairway to heaven’ ascending the steep bank.”

The modest wooden Church of the Prophet Elijah in Belozersk — once considered a national treasure, but now sadly disassembled while awaiting restoration — is still impressive in Brumfield’s 1996 photograph with three graduated levels and a single weathered dome.

The Central Asian journey to the old Turkestan focuses on 14th- and 15th-century Islamic architecture. Situated in an active seismic zone, these monuments with minarets and arabesques were in disrepair by the 1900s, yet photography reclaimed them.

As intriguing as the photos are, Brumfield’s text draws readers in with tales of vast wealth and power and religious devotion. Moreover, Brumfield invites readers to consider not only the circumstances under which the buildings were built, but what happened after Prokudin-Gorsky captured them.

“The Russia that Prokudin-Gorsky recorded was a land in the throes of great, if fitful, social change,” he writes.

Over the years, revolutionary violence and war contributed to the decline of these buildings, or Soviet officials demolished them.

“One can appreciate this work as an extraordinarily beautiful, almost idyllic picture,” Brumfield said. “But I would like my readers to understand that between his work and mine, there occurred a series of cataclysms in Russia within a decade after his photographs. The Russian land and non-Russian parts of the empire were plunged into chaos and destruction. On an almost unimaginable level, millions of people died. The areas that he photographed underwent a profound transformation, and that occurred at a great cost.”

The contrast of great beauty and great misery enhances the scholarly record.

“It was a violent century for Russia,” Brumfield said. “And architectural heritage reflects that in a very direct way.

“These photographs, they’re not just objects of extraordinary beauty and visual power, but they also stimulate the reader to think about what happened during the intervening decades.”

Critics have noted that in Journeys, Brumfield has given a uniquely beautiful, insightful view of a complex land and created a magnificent volume to learn from and to appreciate.

Journeys Through the Russian Empire: The Photographic Legacy of Sergey Prokudin-Gorsky will be available at the Howard-Tilton Memorial Library and for purchase at the Tulane bookstore. 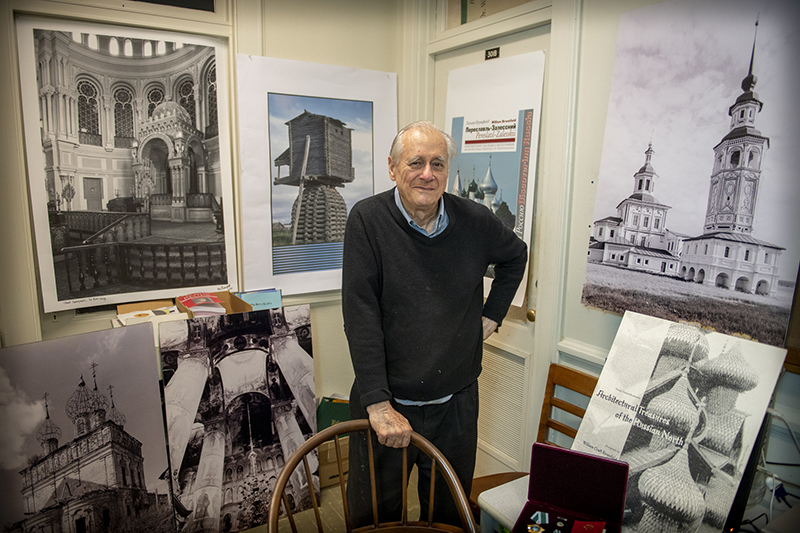