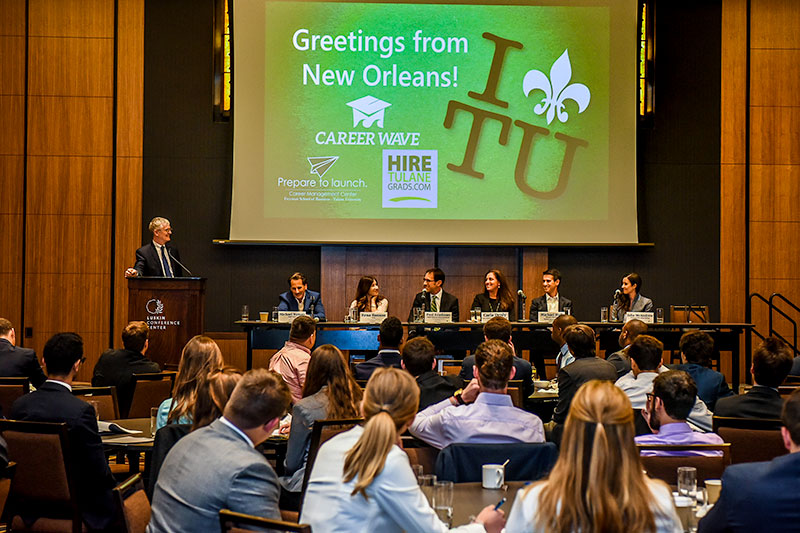 Through a partnership with the A. B. Freeman School of Business’ Career Management Center, the Tulane Career Wave Initiative provides career networking experiences like Tulane Takeover currently held in Los Angeles and New York with plans to expand to Washington, D.C., Chicago and Houston in the future. (Photo by Tom Matranga)

Tulane Takeover: Los Angeles drew 60 Tulane students and 90 alumni and parents at a career networking event over spring break at the end of March.

Held on the UCLA campus, the Tulane Career Wave Initiative focused on career paths but was not designed for direct recruitment and interviewing. “This allowed students a different and more comfortable approach,” said Byron Kantrow, director of Career Wave programming, “in part because they had Tulane family on the other side of the table.”

Two rounds of Focused Career Conversations were included in the program along with a panel featuring alumni representing Sony, Verizon, UCLA’s Fielding School of Public Health, PMK-BNC and Morgan Stanley.

Two years ago, the Tulane Career Wave Initiative hosted its first Tulane Takeover in New York City, featuring nearly 100 alumni and parents from a variety of professional backgrounds who live and work in the New York area. That event was held during the fall break in October.

Through a partnership with the A. B. Freeman School of Business’ Career Management Center, the Tulane Career Wave Initiative provides career networking experiences for students by connecting them with alumni and Tulane parents.

The Tulane Takeover team hopes to build on the events in Los Angeles and New York and expand to Washington, D.C., Chicago and Houston in the future.

For more information on this program and others, visit the Career Wave website or contact Byron Kantrow at bkantrow@tulane.edu.

Like this article? Keep reading: Get a glance at life in Hollywood without leaving the Tulane campus