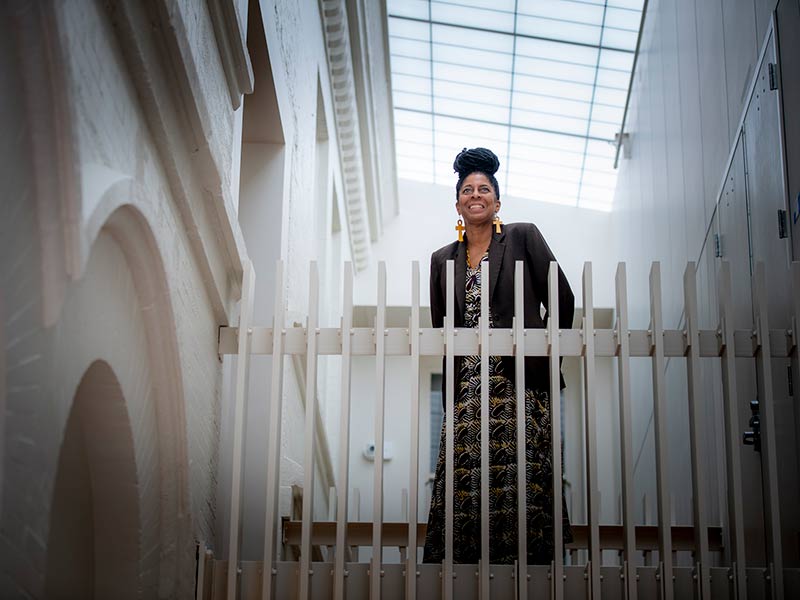 In 2019, Tulane announced that the Office of Multicultural Affairs and the Office of Gender and Sexual Diversity, along with Religious Life, would be renamed the Carolyn Barber-Pierre Center for Intercultural Life in honor of Carolyn Barber-Pierre, assistant vice president for Student Affairs and Intercultural Life, who has worked at Tulane for more than 30 years, serving the student community and moving the university toward a more inclusive environmental for all. She is pictured in the center’s new space in Richardson Building. (Photo by Paula Burch-Celentano)

Two centers dedicated to fostering equitable social, cultural and academic programming so that all students can thrive during their years at Tulane, have a new campus home.

The Carolyn Barber-Pierre Center for Intercultural Life and the Center for Academic Equity will now be housed in the Richardson Building on the uptown campus’s Academic Quad. Students, faculty and staff are invited to an open house from 3 p.m. to 5 p.m. on April 23 to view the new space. To RSVP for the open house, click here.

In 2019, the university announced that the Office of Multicultural Affairs and the Office of Gender and Sexual Diversity, along with Religious Life, would be renamed the Carolyn Barber-Pierre Center for Intercultural Life. The center honors Carolyn Barber-Pierre, assistant vice president for Student Affairs and Intercultural Life, and a Tulane Trailblazer. The Trailblazers program is an ongoing initiative established by Tulane President Michael Fitts that celebrates the contributions of people from diverse backgrounds who have made a substantial and lasting impact at Tulane.

Barber-Pierre has worked at Tulane for more than three decades, serving the student community and moving the university toward a more inclusive environment for all. She first arrived at the university in 1984 as the director of special services, providing services and resources for students living with disabilities, commuter students and students of color.

She said she was most passionate about creating an equitable experience for students of color, drawing from her own college experiences.

“I was an (undergraduate) student of color at a predominately white institution, and I knew some of the challenges that BIPOC students have, and I really wanted to work on creating a space that focused on providing services, advocacy and programming where they truly could feel that they were a part of this campus community,” Barber-Pierre said.

She took the time to meet with students and assess what their needs were and then collaborated with administrative staff and departments to figure out how to address those needs in a sustainable way.

“I was given the opportunity to create experiences that were nonexistent and really try to work on how we should either sustain it (a program), get rid of it or rethink it.”

She also created an advisory group for faculty and staff of color, addressing matters such as “How do we diversify the curriculum? How do we create classrooms that are safe and inclusive?”

Fast-forward 37 years at Tulane, and Barber-Pierre continues to play a pivotal role in facilitating countless collaborations and developing a plethora of cultural leadership development and engagement programs and opportunities, creating inclusive spaces and student organizations that serve several marginalized communities such as BIPOC (Black, Indigenous and People of Color), LGBTQ+, first-generation students, religious or spiritual, and more.

The new space named in her honor in Richardson Building provides more areas for students to hold and attend meetings and events and to work and congregate. It is also positioned where students and center leaders can easily collaborate with other departments and offices. The Center for Academic Equity, whose mission mirrors that of the Carolyn Barber-Pierre Center for Intercultural Life by addressing the academic needs of underrepresented students, is now right next door.

Paula Booke, director of the Center for Academic Equity, said, “Bringing the Center for Academic Equity, a part of Newcomb-Tulane College, and the Carolyn Barber-Pierre Center for Intercultural Life together creates a world of possibilities for our students. By working collaboratively across our respective areas of academic affairs and student affairs, the newly renovated Richardson Building will become a hub where students can celebrate their identities and grow in inclusive excellence.”

Jasmin Washington, a School of Public Health and Tropical Medicine graduate student who also works as a peer advocate and has utilized the space already, said, “I hope that the students can see this new area as their space, a new home where they can be unapologetically and authentically them.”

In addition to colleagues and mentors, Barber-Pierre said that her longevity at Tulane is because of the students.

“I have been inspired by young people who want so much to succeed, and I think, how do we eliminate the roadblocks, the challenges to allow them that success?” she said.

“To have alumni come back and say, ‘If it wasn’t for you, I would have never made it, and for me, that’s more important than any title,” she said. “Someone’s got to be here to make sure that they’re represented.”

Of all the programs she has been an integral part to helping create, the Martin Luther King Week for Peace and the Peer Mentors Program are the most memorable to her.

The MLK Week for Peace featured a week of programming, in partnership with Xavier University, that included an interfaith celebration, a universitywide discussion with a major speaker, a candlelight march and community forums. (Tulane now partners with Xavier, Loyola University, Dillard University and the University of New Orleans for the MLK Day of Service).

The Peer Mentors Program matches an upperclassman with a first-year student to help new students transition and navigate their way through Tulane. Barber-Pierre said she still sees students maintain their friendships with mentors well beyond their undergraduate years.

“When I think about alumni who say, ‘That was my mentee, or that was my mentor and they’re the godfather or godmother of my child,’ it’s that kind of impact that has brought me joy,” she said.

On being recognized as a Tulane Trailblazer, Barber-Pierre said she is very humbled and honored but acknowledges those who paved the way for her as well.

“I stand on the backs of other people who gave me opportunities, so why not pay it forward?

“I’ve always wanted to live my life with a sense of purpose, so that I can be the light for someone who’s in the darkness, who needs a little push, a little support, so that they can be successful and feel like they can thrive,” she said.