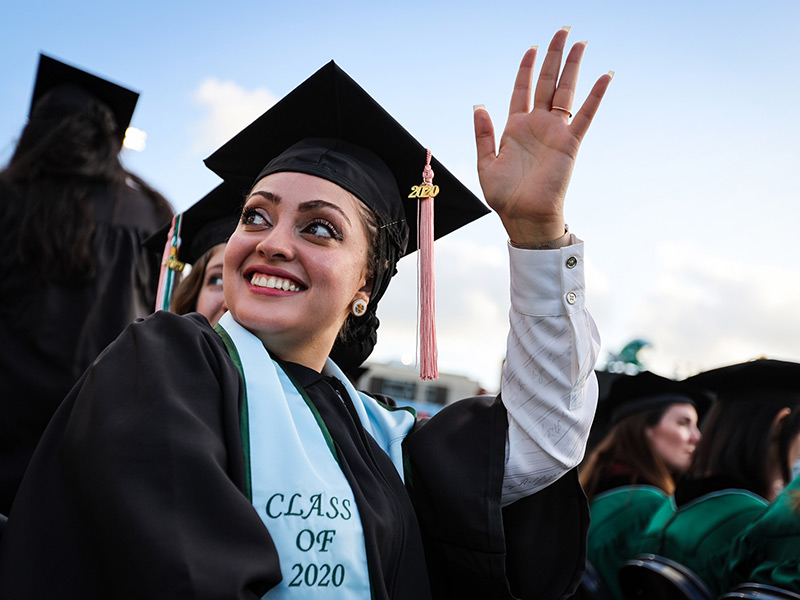 Graduates of the Class of 2020 returned to campus for a Commencement ceremony in Yulman Stadium on April 22, 2022. (Photo by Rusty Costanza)

Against the backdrop of a beautiful spring sunset over Yulman Stadium, almost 1,200 members of the Class of 2020 gathered for their “official” Tulane Commencement ceremony, held Friday night.

President Fitts welcomed the audience of more than 5,000 by recalling the path — marked by crisis and uncertainty — that brought the Class of 2020 to this day.

“You’ve demonstrated resilience, flexibility, persistence, and — this is key — a good sense of humor,” he said. “You’ve faced a crisis. And you’re not only still standing — you’re moving forward. Each of you learned the most important lesson you can carry with you every day for the rest of your life: The knowledge that you can do hard things.”

Reminding the graduates that many of the world’s “easy” problems have been solved already, Fitts encouraged them to accept their challenge to solve more difficult issues.

Solving problems and tenacity are appropriate messages for any graduating class, but they seemed especially appropriate for the Class of 2020, whose original Commencement ceremony was postponed from two years ago due to COVID-19 restrictions.

Then Fitts turned the podium over to Col. Douglas G. Hurley, the keynote speaker. Hurley, a 1988 engineering graduate of Tulane and a former member of Tulane ROTC, is a NASA astronaut, space shuttle pilot and commander of the SpaceX Crew Dragon.

Two years ago, when the Class of 2020 was likely reflecting on what should have been their successful departure from university life, Hurley was sitting atop a rocket, reflecting as well.

“I thought a lot about the thousands of people that built, designed and drove this spaceship onto the launchpad. You think about every one of them and all the work that went into it, which was countless years, to get us to that point. I also thought about, it’s the first flight with a human space vehicle in 30 years. So, I felt a little bit of pressure.”

Hurley recalled his road to Tulane University, as well as his road to the launchpad. He noted that along the way, he framed obstacles as challenges, whereas others might have called them failures or disappointments. His college career was sometimes marked by challenges, as was his professional career.

“The real difference you're going to make will be a function of those challenges you go through and what you do to work on them,” he told the graduates.

“Don't ever give up. It's not going to be easy, but just like today, it'll be worth it.”

As nighttime fell, graduates crossed the stage for almost 90 minutes, high-fiving and punching the air as they did.

In this Unified Commencement Ceremony, 2020 graduates from all 10 schools, at all levels — from PhD to bachelor’s degrees — walked, shaking hands with President Fitts and the dean of their respective school. Graduates sported decorated mortarboards and carried spangled and fringed second-line umbrellas. And proud friends and family presented them with bouquets, balloons and plenty of hugs.

At the end of the night President Fitts invoked a space exploration quote — “Let’s light this candle” — as fireworks lit up the sky above the Angry Wave, and graduates were sent forth to enjoy New Orleans, Crawfest and the great beyond. 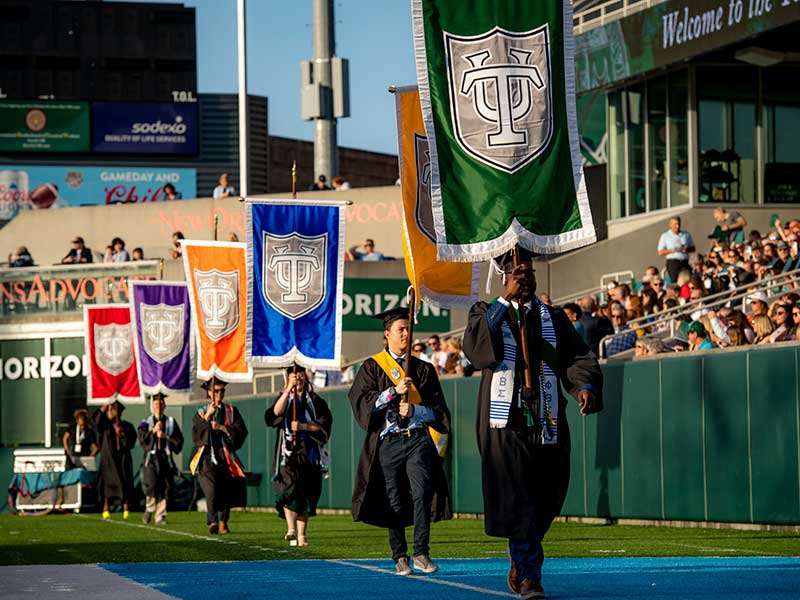 Gonfalons process into Yulman Stadium on Friday, April 22, for the Class of 2020’s Commencement. (Photo by Paula Burch-Celentano) 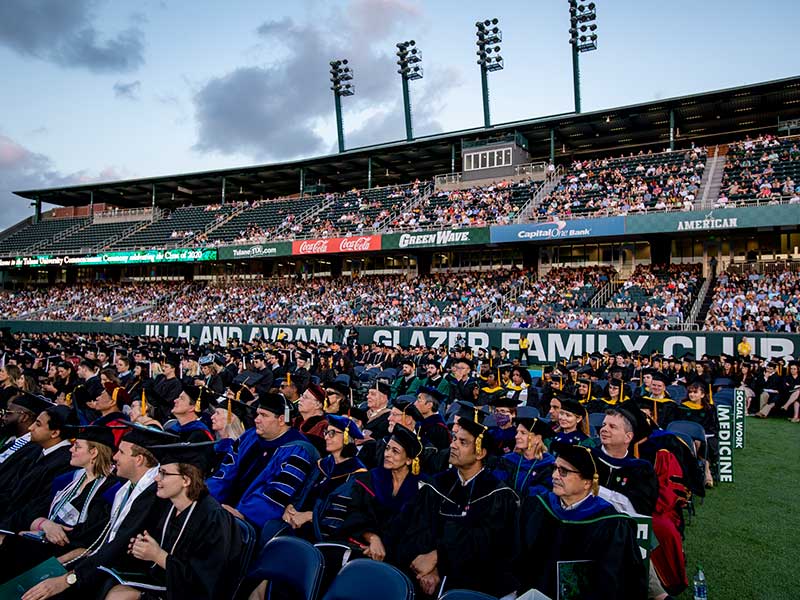 A crowd of more than 5,000 individuals, including more than 1,200 members of the Class of 2020, attends Friday’s ceremony. (Photo by Paula Burch-Celentano) 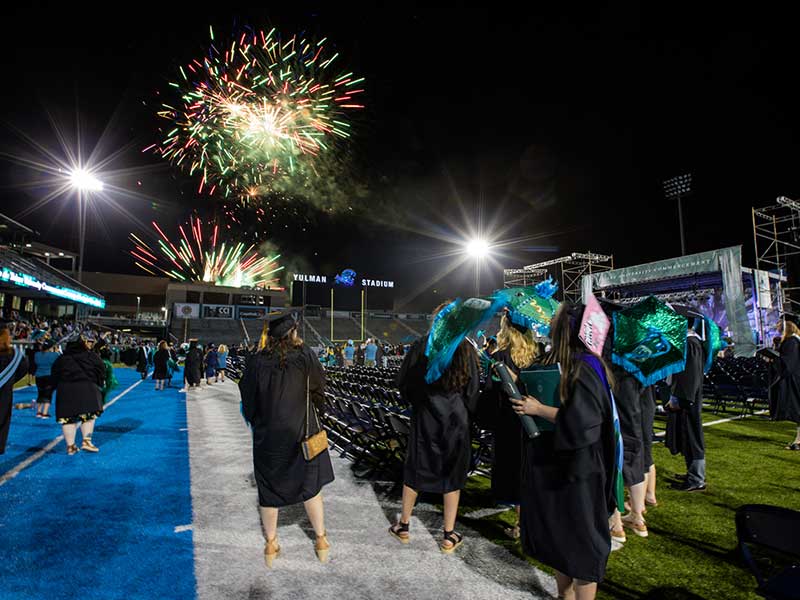 Graduates watch fireworks explode over Yulman Stadium at the end of the ceremony. (Photo by Rusty Costanza)

Commencement 2020 is here!
Parallel universe
Know a great grad from the Class of 2022? Tell ‘Tulane Today’!
Branching Out
Tulanians celebrate Give Green Day 2022