Guide dog goes with grad every step of the way 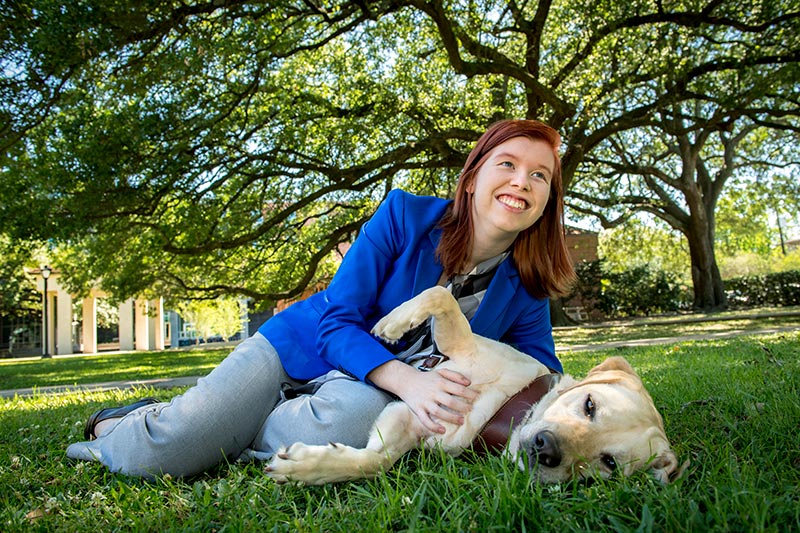 Tulane University senior Christy Smith will graduate at the 2017 Unified Commencement Ceremony with her guide dog, Bramble, at her side. (Photo by Paula Burch-Celentano)

While counting the days until the 2017 Unified Commencement Ceremony, Tulane University senior Christy Smith attempted to nominate an exceptional fellow classmate for an honorary degree — her guide dog, Bramble.

For the past two years, the yellow labrador has accompanied Smith, who is legally blind, to her daily classes. Though Bramble won’t fetch an honorary degree, Smith saw it fitting to include her canine companion in her graduation photos. On May 20, the duo will cross the Mercedes-Benz Superdome stage the way they’ve done everything else—together.

Smith, a native of Oklahoma City, has a double major in gender and sexuality studies and homeland security studies.

“PLEN teaches you how to build a resume, how to network and how to look for a job or internship.”

— Christy Smith, a member of the Class of 2017 and a participant in a Public Leadership Education Network (PLEN) seminar in Washington, D.C., with a grant from the Newcomb College Institute.

While initially searching for colleges, Smith was thrilled to find the gender and sexuality studies program at Tulane. She was also impressed by the wide array of student resources offered by the university, citing Newcomb College Institute (NCI) as particularly helpful.

In March 2016, Smith received a grant from NCI to attend a Public Leadership Education Network (PLEN) seminar in Washington, D.C.

“PLEN teaches you how to build a resume, how to network and how to look for a job or internship,” she said. “PLEN helped me believe that I could go off to D.C. and find a job, be successful and live independently.”

Smith said that her participation in PLEN and NCI programming thoroughly prepared her for her post-commencement plan to attend the Daniel Morgan Graduate School of National Security in D.C. where Bramble will once again be by her side.

Like this article? Keep reading: Anything is possible with a posse behind you