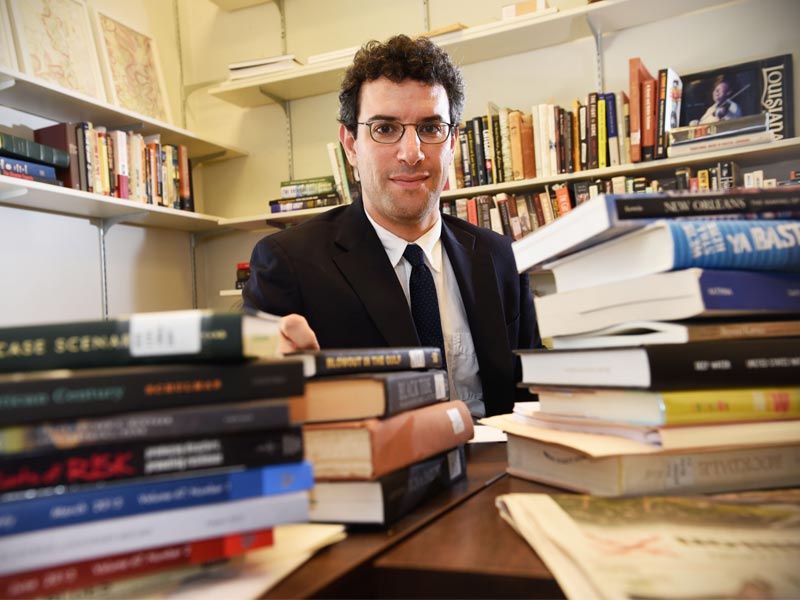 Andy Horowitz, assistant professor of history at the School of Liberal Arts, has been awarded a prestigious New Directions Fellowship from The Andrew W. Mellon Foundation. (Photo by Cheryl Gerber)

While conducting research in Congressional records and state archives for his award-winning first book, Katrina: A History, 1915-2015, Assistant Professor of History Andy Horowitz was feeling frustrated. Reading about the actions being pursued by policymakers that he knew would result in calamity, given the benefit of hindsight, left him wishing he could travel back in time with a warning. Even more frustrating was the sense that people were repeating similar mistakes today.

“I wonder if there is another way for historians to contribute to shaping the future,” he thought.

Recently awarded a prestigious New Directions Fellowship from The Andrew W. Mellon Foundation, the historian will pursue a legal education in the hopes of doing just that.

The program is designed to allow faculty members in the humanities and humanistic social sciences to acquire specialized training outside their own areas of special interest so those scholars can work on problems that interest them most, while maintaining an appropriately advanced level of sophistication. Only a dozen fellowships are awarded each year.

As a 2021 New Directions Fellow, Horowitz will have the opportunity to attend a law school program so he may become a more refined analyst of legislation, litigation, and social policy. He intends to use his newly gained knowledge to contribute in a more robust way to the interdisciplinary field of disaster studies, with a focus on inequalities of race and class, and the looming necessity of economic transformations and mass migrations.

Horowitz, who also holds the Paul and Debra Gibbons Professorship, is a historian of American urban and environmental history. His research focuses on disasters and the questions they present about race, class, community, trauma, inequality, the welfare state, extractive industry, metropolitan development, and environmental change. A faculty member in the School of Liberal Arts, he is also affiliated with the university’s interdisciplinary programs in Environmental Studies and City, Culture, and Community.

“I became a scholar because of how much school meant to me. The chance to further my education — and especially in a way that I hope will enable me to better participate in pressing conversations about the climate crisis — is incredible,” Horowitz said. “It’s also an extraordinary honor and a humbling vote of confidence from Mellon.”

His first book traced the causes and consequences of America’s iconic modern disaster across a century to demonstrate that “the places in which we live and the disasters that imperil them are a product of state policy, cultural imagination, economic order, and environmental possibility.” It received the 2021 Bancroft Prize from Columbia University — one of the most highly renowned prizes in the field of American history—and was named both the 2020 Humanities Book of the Year from the Louisiana Endowment for the Humanities and a 2020 Nonfiction Book of the Year by Publishers Weekly.

His next book will examine ambitious attempts at urban transformation in light of the climate crisis. As climate change is prompting Americans to re-examine how they can and should live together, including gathering calls for a massive “managed retreat” from the nation’s coasts, the book will reconsider government action to prevent or repair past crises.

He is also a regular contributor to public debate about the climate crisis and disaster policy in national media outlets, such as The New York Times and National Public Radio, with particular attention to racial and economic justice. With the training provided by the fellowship, he will be better prepared to conduct more complex analyses and translate the lessons of the past into potential policy solutions for the present and future.

“There is a simple but profound idea at the heart of the New Directions Fellowship program,” said School of Liberal Arts Dean Brian Edwards, a 2008 fellow himself. “Namely that the humanities can be enhanced by opening themselves up to new fields of inquiry and taking seriously the lessons that the disciplines have to teach each other.

“Andy Horowitz’s remarkable ability to translate academic historical research into accessible, thoughtful analysis for broad audiences has allowed his work to have an impact on the national conversation about environmental change,” Edwards said. “At a time when our nation is coping with disasters of unprecedented scale and frequency, all compounded by racial and economic disparities, his work demonstrates the vitality of the humanities and its crucial role in the world.”

Based in New York City, The Andrew W. Mellon Foundation seeks to build just communities where ideas and imagination can thrive and is the largest supporter of the arts and humanities in the United States.