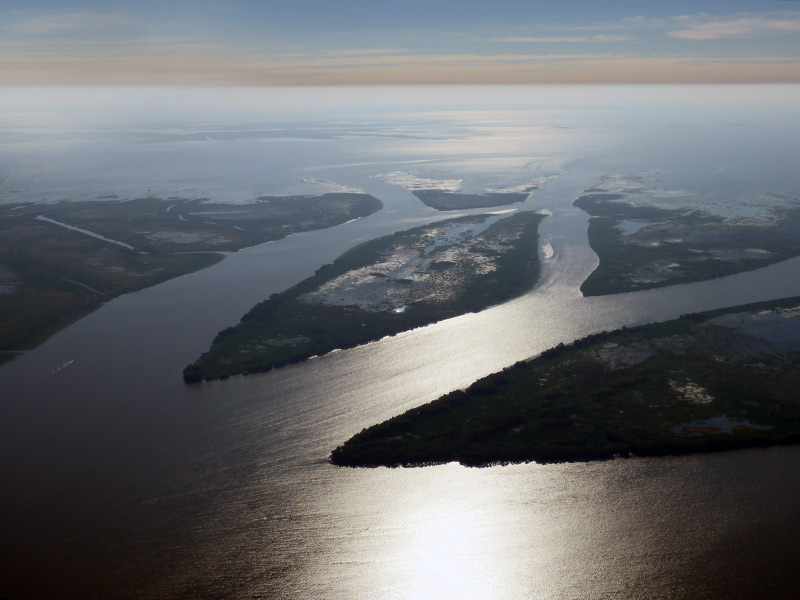 Wax Lake Delta near the Atchafalaya River is the subject of a study published in ‘Nature Geoscience.’ Alex Kolker, a Tulane professor of earth and environmental sciences, contributed to the study, which shows that land restoration can reduce the load of carbon dioxide in the atmosphere. (Photo provided by Alex Kolker)

A Tulane University researcher is among of team of scientists who say that building land to restore Louisiana’s coast can also help pull carbon dioxide out of the atmosphere.

Alex Kolker, a Tulane professor of earth and environmental sciences and a researcher with the Louisiana Universities Marine Consortium, joined researchers from the University of Florida and the University of Texas in a study of the Wax Lake Delta of the Atchafalaya River published in the journal Nature Geoscience.

“The Wax Lake Delta is one of the few natural areas of land formation in Louisiana, and a good example of the kind of ‘river diversion’ that the state plans to develop as part of its master plan for coastal restoration,” Kolker said. It formed naturally after the initial river diversion was engineered in 1941 to reduce flood stages in the nearby port of Morgan City.

As part of the study, Kolker led the field campaign, which involved the collection of sediment cores to quantify the burial of organic carbon. Despite relatively low concentrations of carbon in the cores, the accumulation of sediment over 60 years of delta building resulted in the burial of a significant amount of carbon.

“We discovered that in a system losing land at a rate equivalent to one football field every hour, an engineered river diversion not only built land, but also buried carbon at rates comparable to, or greater than, that of the most efficient terrestrial carbon sinks of similar area,” said lead co-author Michael Shields, postdoc in the Department of Geological Sciences at the University of Florida.

Carbon sinks are natural systems that suck up and store carbon dioxide from the atmosphere. The main natural carbon sinks are plants, the ocean and soil.

Researchers said the land-building accomplished by deltas can reduce atmospheric carbon by trapping the carbon in sediment and thus preventing it from returning to the atmosphere.

Currently there are at least 24 deltas globally threatened by greater subsidence and sea-level rise compared to coastlines without deltas, according to the paper. The study shows that carbon storage should be considered a real and quantifiable benefit of the land-building process, both for coastal Louisiana and retreating coastlines in deltaic regions of the world that are also threatened by global change.

Like this article? Keep reading: Geologist enjoys life on the rocks