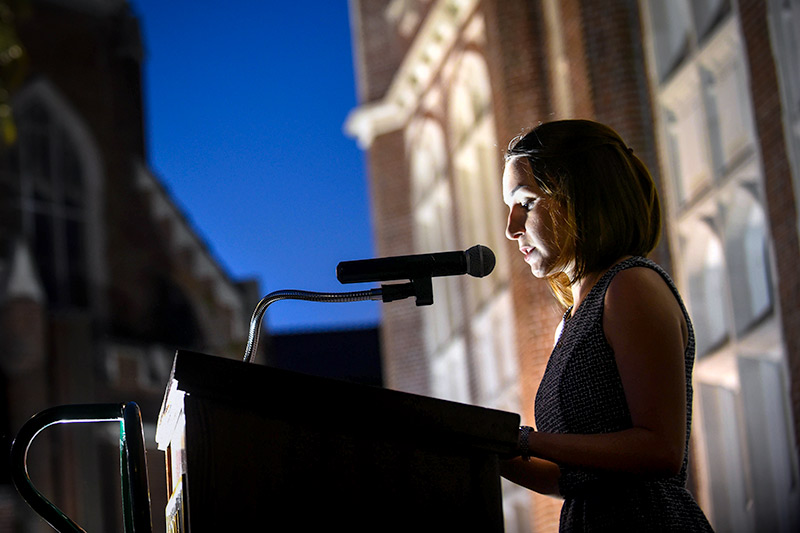 First-year Tulane Law student Margaret Martin is pursuing change in legislature on behalf of sexual assault victims. She served as keynote speaker during the annual 2016 Take Back the Night event on Thursday (Oct. 27). (Photo by Cheryl Gerber)

Tulane University Law School student Margaret Martin did not participate in the annual Take Back the Night event like she had in past years. This time, she was the keynote speaker.

Take Back the Night, held Thursday (Oct. 28), is an event designed to raise awareness about sexual violence of which Martin is a survivor.

Martin completed her undergraduate degree in political science with an emphasis in gendered legislation and policy formation at Tulane in just three years. As a law student, she hopes to work in the fields of sexual harassment and discrimination.

“I hope my story of recovery is a testimony in the fight against sexual assault.”

Today, she serves as an advocate for victims. She works for the Women’s Leadership Council of Southeast Louisiana as a component of the Women’s Legislative Leadership course taught by Newcomb College Institute administrative assistant professor Anna Mahoney.

“In this space, I no longer felt like a victim of sexual assault, but a survivor,” said Martin of the course.

Louisiana state representative Helena Moreno described Martin as “well-known in the legislature by the work she is doing and by the changes she is pushing for at the state level.”

More than 600 students, faculty and community members from the Greater New Orleans area attended Take Back the Night, which included a ceremony, a march of solidarity down St. Charles Avenue and a “speak out,” where survivors were encouraged to share their stories.

“Take Back the Night is an event to raise awareness about gender-based violence and empower survivors to speak out about their experiences in a supportive environment,” said Erin Shapiro, staff counselor at Loyola University, where the march began. “It also offers an opportunity to connect with survivor service agencies and raise awareness for an important cause.”

Funds from the event are donated to organizations dedicated to serving victims of gender-based violence.

Martin encourages others to speak out about their experiences.

“I hope my story of recovery is a testimony in the fight against sexual assault.”

A homecoming crossword to puzzle over
Election 2016: Is this presidential campaign the nastiest one yet?
Tulane workshop exposes boys to STEM
Show us your Tulane jack-o-lantern
Enjoy coffee with a Tulane officer