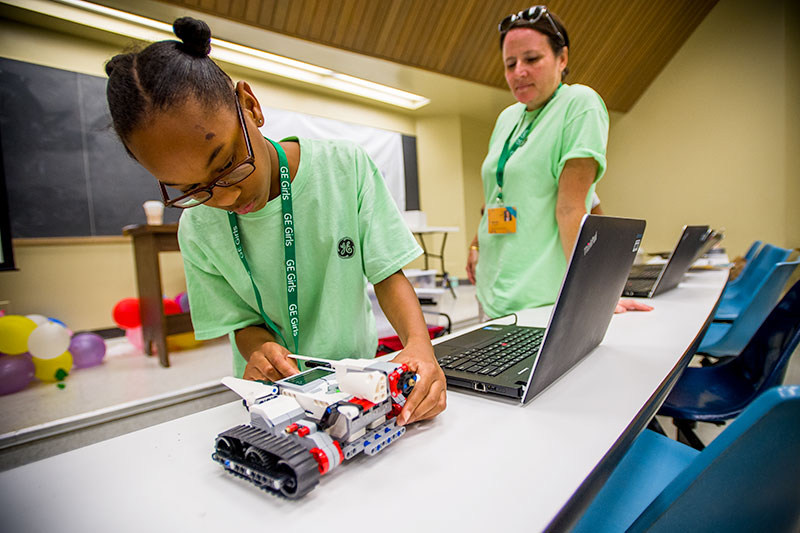 On day one of the General Electric (GE) Girls summer program hosted by Tulane University, 13-year-old Ronae Clayton had her future plans all lined up. “I’m going to be a five-star chef and own a restaurant,” she said.

By day four of the weeklong camp, Clayton’s plans had become fuzzy. She knew what she loved, but she was experiencing a side of science that she hadn’t explored before.

“I really like programming the Lego robots,” said Clayton, a rising eighth-grader at Benjamin Franklin Elementary Math and Science School in New Orleans. “We’ve done a lot of different things, but that part was my favorite.”

Clayton was among 33 girls to participate in the inaugural New Orleans program held June 5 through June 9. The camp taught students to program robots, create LED crowns and make their own lip gloss in a chemistry lab, among other science-driven activities.

“Middle school is the time when girls begin forming ideas about what they like and don’t like,” said Allyson Mackay, GE co-lead for the New Orleans camp and a 2008 Tulane graduate. “Our program exposes them to electronics, physics, programing, chemistry and teamwork. Here, they can see it’s not complicated, and it helps them to not be afraid.”

The camp is the result of a partnership between GE and Tulane with a goal to expose girls to science, technology, engineering and math (STEM) and pursue STEM in college. There are currently more than 10 GE Girls camps around the country. This is the first in New Orleans.

“Females only make up 23 percent of the degrees and certificates given in either computer science or engineering in the state of Louisiana,” said Michelle Sanchez, professor of practice in the Tulane School of Science and Engineering and director of K-12 STEM Outreach for the university. “GE Girls provides these young students with successful female role models while teaching leadership and confidence skills.”

After completing the program, participants are then eligible for an annual $5,000 scholarship if they major in STEM in college.