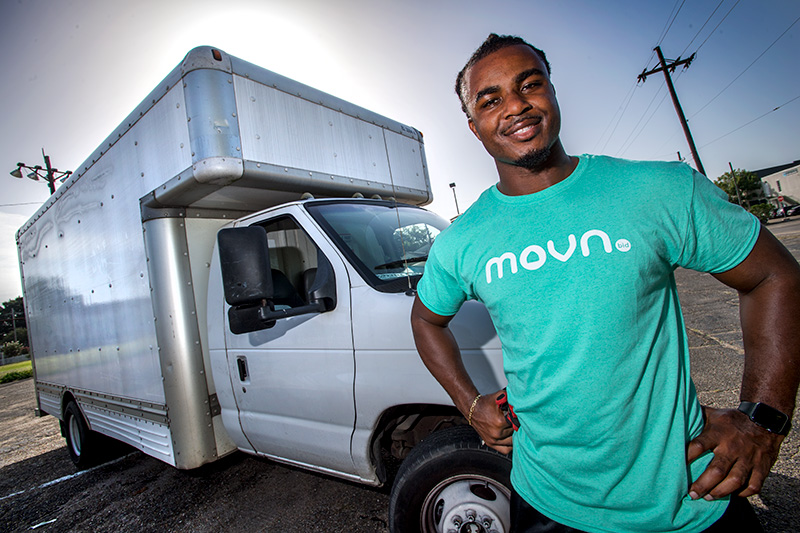 Brandon LeBeau, a 2015 A. B. Freeman School of Business graduate, is the founder of local moving company Movn. (Photo by Paula Burch-Celentano)

As a professional football player, Tulane University alumnus Brandon LeBeau has some slick moves on the field. As the founder of local moving company Movn, LeBeau also specializes in smooth moves off the gridiron.

“We take pride in all of the moves that we do, whether it’s a small master bedroom or an entire home,” said the 2015 A. B. Freeman School of Business graduate.

While attending Tulane, LeBeau first gained experience in coordinating moves for students between classes and Tulane football games. LeBeau played as a safety for the Green Wave football team.

“We take pride in all of the moves that we do, whether it’s a small master bedroom or an entire home.”

“I worked for Housing and Residence Life and got familiar with moving students’ furniture around campus on a consistent basis,” he said.

Once LeBeau graduated, he continued providing moving services to students living on and around the uptown campus.

After living in Kiel, Germany, and playing football professionally in the German Football League 1 Division, LeBeau collaborated with Mike Yest, a Tulane professor of practice in finance, to launch Movn in February 2018.

“I try to create a stress-free environment for students. Last-minute moves are one thing that we specialize in, because a lot of companies don't offer same-day service,” he said. “We also have a unique feature, which allows customers to offer a reasonable flat price for the job.”

LeBeau plans to expand his business to Baton Rouge before returning to Germany next year.

“I would love to one day become the official moving company for Tulane’s staff and students,” he added.

To the budding entrepreneurs at Tulane, LeBeau offered these words: “Keep striving for what you want to achieve. Tulane has great professors, who teach you how to think outside of the box. Take their words of advice, and you will be able to create and evolve.”