Nature works in strange ways: SARS-CoV-2 is a natural virus wreaking havoc around the world with COVID-19 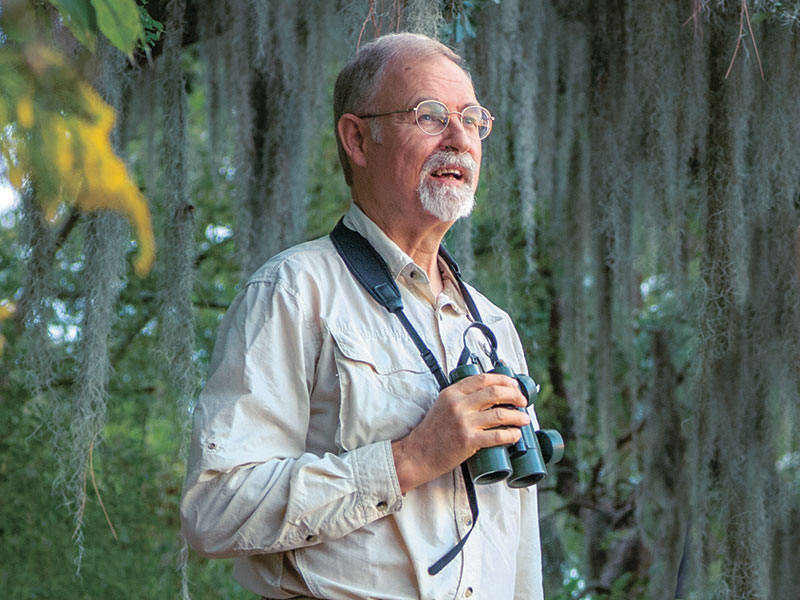 Thomas Sherry, a professor of ecology and evolutionary biology, is a noted expert on the evolution of tropical birds. (Photo by Paula Burch-Celentano)

Thomas Sherry has spent his career studying how nature works.

A Tulane professor of ecology and evolutionary biology, he concentrates on birds, especially the diversity of species of tropical birds. He’s also Siegel Professor of Social Entrepreneurship at the Taylor Center for Social Innovation and Design Thinking and president-elect of the American Ornithological Society.

He’s dedicated to conservation biology. But, “I don’t think we can take care of the natural environment if we’re not taking care of the human environment.”

“What I’ve seen is that COVID-19 is probably not the last disease that is going to jump to humans.”

He works diligently in his classes to raise consciousness about issues of environmental, social and racial justice.

As populations of humans grow and economic growth occurs, habitats such as forests are fragmented. As people expand in areas, “they survive by feeding on wildlife, birds, mammals and so on. And they are more likely to come into contact with whatever diseases are out there,” said Sherry.

“Zoonosis” is disease that can be transmitted from animals to humans. These diseases “have co-evolved with animals for long periods of time.” The animals have evolved the ability to tolerate the viruses, but humans have not evolved for that.

While viruses are natural phenomena, when a virus such as SARS-CoV-2 jumps to humans causing a disease like COVID-19, “we suffer enormously until or unless we can develop vaccines,” he said.

SARS-CoV-2 was formally identified by scientists in China in early January. The virus “got into the human population, probably ultimately from bats and probably from wildlife that was being sold in markets.”

“Human impacts on the environment go back thousands of years,” added Sherry. “Many of the viruses have been in native animal populations for probably millions of years.”

Global pandemics have caused devastation for hundreds of years. As an example, Sherry points to the effects of the viral disease smallpox on Native Americans. That human population had no immunity against the disease, brought by colonizers to the New World.

Global travel today, too, is a major factor in the spread of COVID-19.

“What I’ve seen,” said Sherry, “is that COVID-19 is probably not the last disease that is going to jump to humans. And we do tip the scales in favor of them jumping to humans as we move into areas where there are animal populations that harbor these viruses.”