Neurosurgeon tells secrets of the brain and heart 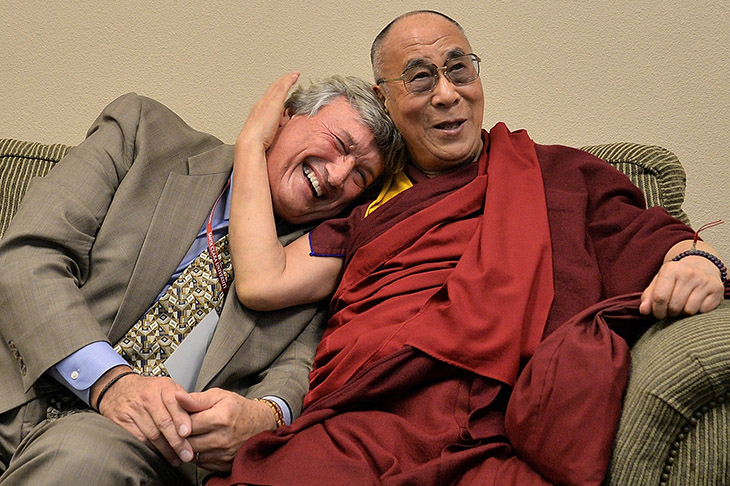 Dr. James R. Doty, a 1981 graduate of Tulane University School of Medicine, is a professor of neurosurgery and the founder and director of the Center for Compassion and Altruism Research and Education (CCARE) at Stanford University. Here, he shares a moment with His Holiness the 14th Dalai Lama who is the founding benefactor of CCARE. (Photo from Firdaus Dhabhar)

When Dr. James R. Doty was a somewhat lost, 12-year-old boy, a chance meeting with a woman changed the course of his life.

Doty, a 1981 graduate of the Tulane University School of Medicine, is now a successful neurosurgeon and professor of neurosurgery at Stanford University. In his recently published memoir, Into the Magic Shop: A Neurosurgeon’s Quest to Discover the Mysteries of the Brain and the Secrets of the Heart, Doty recounts his personal story growing up in poverty with an alcoholic father and a mother who had suffered a stroke and was chronically depressed. He felt his life was at a “dead end.”

Into the Magic Shop (Penguin, February 2016) tells Doty’s remarkable story of walking into a magic shop when he was 12 and meeting Ruth, the owner’s mother, who knew nothing about the magic in the store — but a different type of magic.

“Each of us has the capacity to change our lives by changing our brains.”

Over the course of six weeks, meeting with her every day, she teaches him a technique of meditation, mindfulness, visualization and being attuned to “the compass of the heart.” She literally rewires his brain and makes him understand that one’s circumstances only have power if one gives them power. It was his first experience with what is now known as neuroplasticity.

“Ruth made me understand that many people have a negative dialogue going on in their head that results in a negative physiologic response, but that the dialogue is not you. That response not only limits one in regard to living up to their potential but has a very negative effect on their health and even their longevity,” Doty says. “She not only taught me how not to have a response to the negative dialogue, but techniques to change the dialogue to one of self-affirmation.”

The core message of his book, Doty says, is that “each of us has this ability to change how we respond to life’s circumstances and, by doing so, change how the world responds to us.”

As the founder and director of the Center for Compassion and Altruism and Education (CCARE) at Stanford, Doty researches the neural bases of compassion and altruism and how such behaviors have a profound effect on one’s mental and physical health.

He states that, “practicing such behaviors with intention has a more positive effect on health than being at one’s ideal body weight and exercise. It has been demonstrated that, with as little as two weeks of training, one can have not only a positive effect on others but a profound effect on their own health.”