Passion for the game 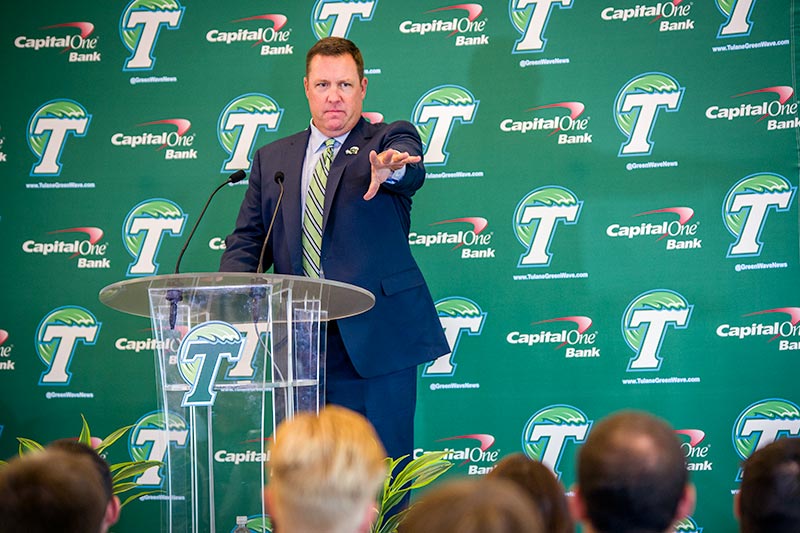 Travis Jewett, the new head coach of the Tulane Green Wave baseball program, takes a moment to directly address members of the baseball team sitting in the front row during a press conference Thursday (July 14) announcing his appointment. (Photo by Ryan Rivet)

If the emotion shown by head baseball coach Travis Jewett at his first Tulane press conference is any indication of how he’ll approach the game, fans of Tulane baseball are in for a wild ride.

During his official university introduction at a press conference Thursday (July 14), Jewett became teary-eyed at several points while speaking to an audience that included his wife and two sons, members of the baseball team, media, and fans of Green Wave athletics.

“A national championship is doable, and I see it. Having vision is important.”

As for the team he’s preparing to lead, they received a glimpse of what’s in store for their upcoming season.

“A national championship is doable, and I see it. Having vision is important,” said Jewett, speaking directly to the student-athletes. Other lessons to be learned, he said, will include values, leadership, academic excellence, integrity and maturity.

Tulane director of athletics Troy Dannen said the group of candidates for the job was outstanding, but Jewett was “the one.”

“I had a pretty good idea coming in that if he was as strong coming in face-to-face as he was on the phone and through references, I knew it was going to be pretty hard for anyone to get around him as a candidate,” said Dannen. “You know fairly quickly in an interview who’s your guy. We interviewed him on Thursday and I offered him the job on Friday morning.”

The More You NOLA: Off the wall
Location information
Fielding Dreams, Part III
Model of reference
Fielding dreams, Part I