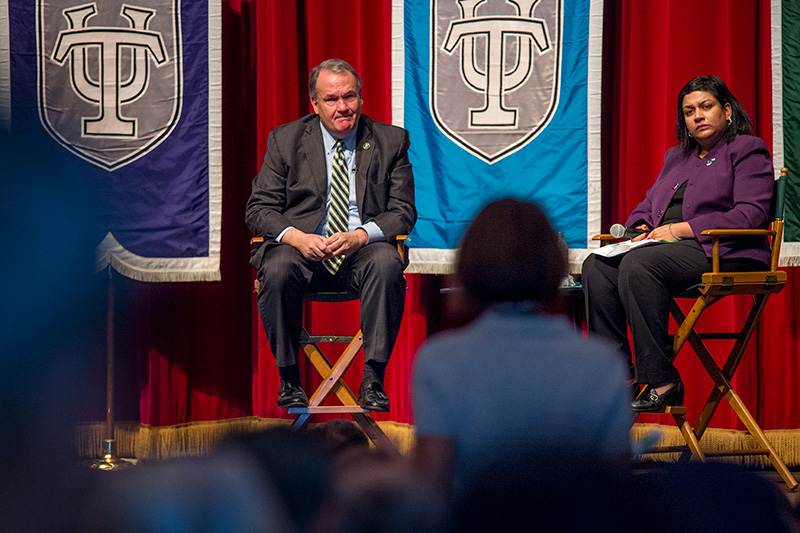 Tulane President Mike Fitts kicked off Homecoming weekend on the uptown campus Friday with his annual President's Town Hall where he welcomed parents and alumni with whom he shared his vision for the university’s future.

“There’s nothing like Tulane University at Homecoming,” said Fitts. “You can feel the electricity in the air.”

“There’s a lot of good news about what is occurring at this institution.”

“In terms of academic rankings, we’ve gone up 14 points — more than any other institution in the top 100 within the U.S.,” added Fitts.

An update on The Commons, which will provide a state-of-the art dining facility and new home for the Newcomb College Institute, offered a glimpse of some of the major projects to come to Tulane. Fitts also discussed how innovative experiential learning facilities, such as the ByWater Institute, the Tulane Brain Institute, the Albert and Tina Small Center for Collaborative Design and the Maker Space, have positively influenced interdisciplinary student engagement.

Of great interest to parents in the audience were the ways in which Tulane is addressing wellness issues — including alcohol use — for students.

“We think these issues are significant,” he said. “We’re talking to students, parents, staff and faculty to see how we can provide an environment to support the wellness of our students.”

During the hour-long Town Hall, questions flowed from members of the audience in addition to those submitted online prior to the event. The submitted questions were read aloud by assistant vice president for campus life Smita Ruzicka, who also served as moderator. Submitted topics ranged from the future of the Posse program to campus safety.

As the event came to a close, one concerned parent expressed her son’s interest in a major that Tulane doesn’t currently have — one that combines coursework in math, statistics, computer science and sociology.

“What are his options?” she asked.

For this one, James MacLaren, dean of Newcomb-Tulane College, was on hand to explain the possibility for students to design their own major.

“We would work with the student directly to connect them to a faculty sponsor,” said MacLaren. “He should come see us in Cudd Hall, and we can help navigate him through that process.”