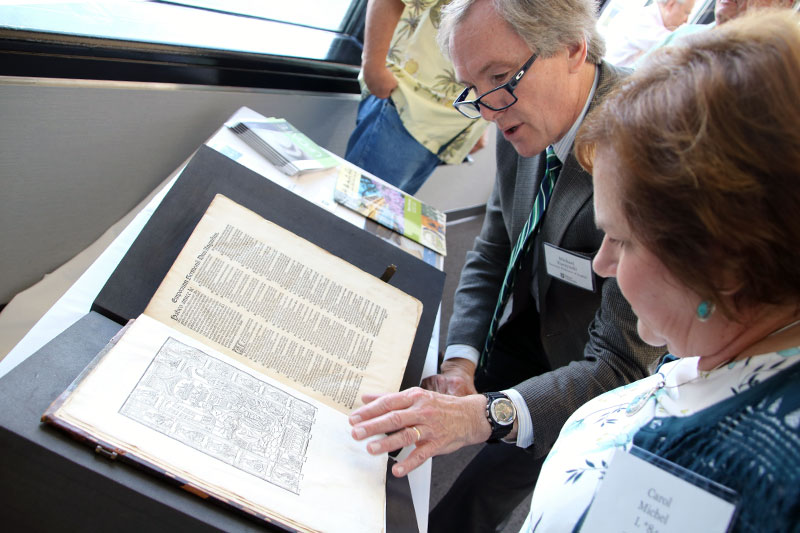 Michael Kuczynski shows off one of the rare books on exhibit in "An Open Book" during Homecoming weekend in early November. The exhibit will be on display through Nov. 30. (Photo by Arielle Pentes)

Michael Kuczynski, professor and chair of the Department of English in the Tulane School of Liberal Arts, believes the past is meant to be touched. That’s the idea behind an exhibit titled “An Open Book” that he curated in collaboration with the staff of Howard-Tilton Memorial Library.

On display is a diverse selection of rare materials recently acquired through a gift from Stuart Rose, a current Tulane parent, bibliophile and major collector.

One of the exhibit’s highlights is a 1499 edition of St. Augustine’s sermons, printed in Paris. It features a woodcut frontispiece depicting Augustine composing his works.  The volume is one of only nine copies known to exist and immediately enhances Tulane’s holdings in rare incunables, or books printed before 1500.

“Open books in medieval art, such as Tulane’s Augustine incunable woodcut, were symbols of the free and generous dissemination of knowledge,” said Kuczynski.

Also on display, from the Rose aquisition is a locally printed book of 1970s Mardi Gras photos. An inventory of slaves assembled in New Orleans around the time of the Louisiana Purchase is also included in the exhibit.

Such works are part of the library’s ongoing effort to document history — from unbridled celebrations of personal expression to evidence of human injustices.

“These new acquisitions build on our strengths and further our ongoing efforts to preserve the historical record for future learners and scholars,” said David Banush, dean of libraries and academic information resources. “We are deeply grateful to Stuart Rose and the Rose Family Foundation for their generous support of Tulane’s libraries.”

The exhibit, open in the Rare Books area on the sixth floor of Howard-Tilton Library, is open to the public now through Nov. 30.