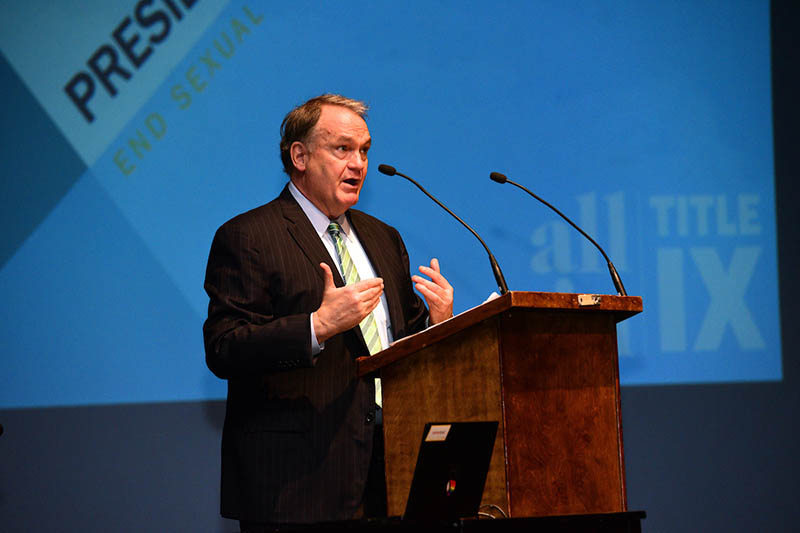 President Mike Fitts addresses the audience at the fifth annual “Shifting the Paradigm” event on Sept. 11, 2019, restating the university's commitment to ending sexual violence on campus. (Photo by Cheryl Gerber)

At the fifth annual “Shifting the Paradigm” event on Wednesday night, Tulane University administrators reaffirmed their commitment to end sexual violence on campus and presented data from the Case Management and Victim Support Services Office, which showed a decrease in the overall number of sexual misconduct complaints the university had received during the 2018–19 academic year.

President Mike Fitts stated the university’s goal to work together to end sexual violence and misconduct. “We are truly unified in unwavering support for every survivor and every ally,” he said. “We are determined to do all we can to help our community get rid of sexual violence.”

President Fitts also noted the progress that Tulane had made since the results of the climate survey were released last year, including courses, programming, the development of guides for parents and faculty on sexual assault prevention, and the hiring of professional staff to handle the cases and work with students.

But, he said, it was the input of Tulanians, particularly students, that brought about the most significant change.

“Due to the wisdom, insight, passion of students on this campus, we really have a model for the country,” Fitts said.

Meredith Smith, assistant provost for Title IX and Clery Compliance, reported that the university saw a decrease in overall reported numbers of sexual misconduct, including assault, stalking, intimate partner violence, harassment and exploitation for the 2018–19 academic year as compared to the 2017–18 academic year. There were decreases in the individual categories as well, except for sexual assault and a miscellaneous “other” category, which includes reported incidents that don’t fit neatly into other categories. Those incidents categorized as “other” rose in the 2018–19 academic year, which Smith said she considered to be an encouraging sign.

“We saw more people reporting to us, just saying, ‘This really bothered me,’ or ‘I'm really concerned about this. And I don't really know what it is, is it sexual harassment or not? But I want the university to know.’ That's a good number for us to speak to,” Smith said, indicating that the increase shows that more people are willing to report.

“And I hope it continues to rise,” she added.

Another statistic indicated that 60% of the reported complaints took place within the 2018–19 academic year. Prior to 2017–18, only about 40% of the cases that were reported actually happened within that same academic year.

“We’re seeing people reporting to us a lot sooner than they used to. That is great, that more people feel that they can come forward and get help and resources a lot sooner, and they don't have to suffer or hold this to themselves,” Smith said.

The evening’s keynote speaker was Dan Tillapaugh, a researcher and associate professor of counselor education at California Lutheran University. Tillapaugh has conducted research at Tulane and at other universities nationwide, but drew on his personal experiences to share how survivors of sexual misconduct get caught up in cycles of shame, self-blame and fear.

As a young man, Tillapaugh was groped by someone in public. Friends who were with him at the time seemed to approve, and for the moment he enjoyed the “positive” attention from that person.

“It was not consensual. I did not consent to it. But it happened. And other people were reinforcing that that was a ‘good’ thing. And then there becomes the potential for a cycle to be created where then I [theoretically] go and do that to somebody else” — because the behavior was reinforced, he said.

In particular, his and others’ research shows that members of LGBTQ communities may feel isolated in that campuswide movements against sexual violence are often geared toward heterosexuals.

While research shows that people who have endured sexual misconduct don’t speak up for a variety of reasons, including being worried about their peers’ reactions and not wanting their families to find out, LGBTQ individuals may be even be more reluctant to report the misconduct because they are afraid of being “outed” or bullied.

One student that Tillapaugh interviewed on the Tulane campus noted that sometimes same-sex situations can seem ambiguous, especially in terms of bystander intervention.

“ ‘If you see two girls leaving the bar together, and one is stumbling” — appearing intoxicated to bystanders — “ ‘not everyone will look at that as a potential problem about sexual assault,’ ” Tillapaugh said, quoting the student.

When students do report misconduct, they tend to confide in their close friends first. Both Tillapaugh and Smith acknowledged the role of friends in helping alert campus administrators or the police to sexual misconduct or violence.

“You have that sphere of influence.  Use it proactively and positively to make change.”