Carlos Wilson, student-athlete, community volunteer and academic leader graduating with two degrees, will represent his class in the Mercedes-Benz Superdome on May 14. (Photo by Paula Burch-Celentano) 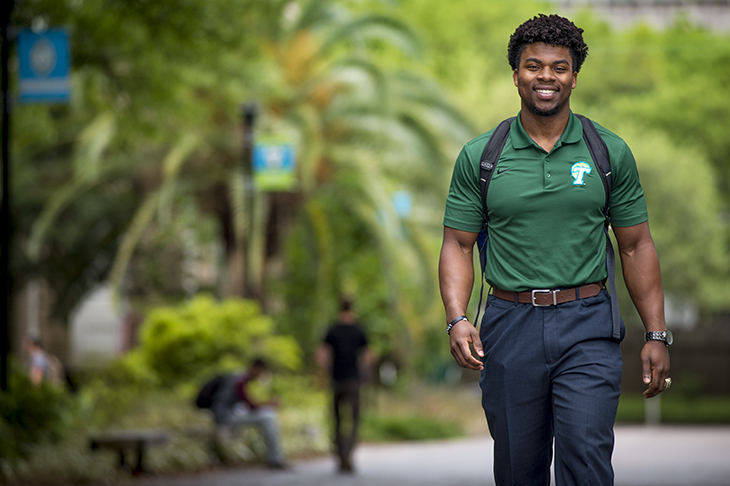 Before Carlos Wilson graduates with two Tulane University degrees and heads off to his dream job with PricewaterhouseCoopers in New York City, he had an item on his bucket list. He wanted to be the student speaker at the 2016 Unified Commencement Ceremony and share his thoughts on success with his classmates.

He won that honor and now hopes his message will reach beyond the 2,000-plus graduates in their caps and gowns at the Mercedes-Benz Superdome on May 14.

The finance major, receiving both his BS in management and a master’s in accounting from the A. B. Freeman School of Business, wants to tell the entire audience to relax about their future: “I knew that I needed to tell everyone: Trust the process; you’ll be all right.”

“I knew that I needed to tell everyone: Trust the process; you’ll be all right.”

His Tulane career is filled with superlatives, from recognition for academic excellence, to extensive volunteer work in the community, to leadership in athletics on the Green Wave football team. He was a teaching assistant in the school of business and a French tutor for student-athletes.

Named multiple times to the conference commissioner’s honor roll, the native of Grambling, Louisiana, was president of the Student-Athlete Advisory Council, a resident advisor in Housing and Residential Life, and received the prestigious Wilson Award and Torch Award in athletics.

Wilson says he won’t miss Tulane or New Orleans when he leaves because “they are a part of me. They are a part of who I am today and who I will become tomorrow. The hospitality and commitment to serving my community that New Orleans taught me will follow me now and into my new community in New York. My values, character, integrity, and dedication to excellence will all follow me from the halls of Tulane to the corridors of my firm."