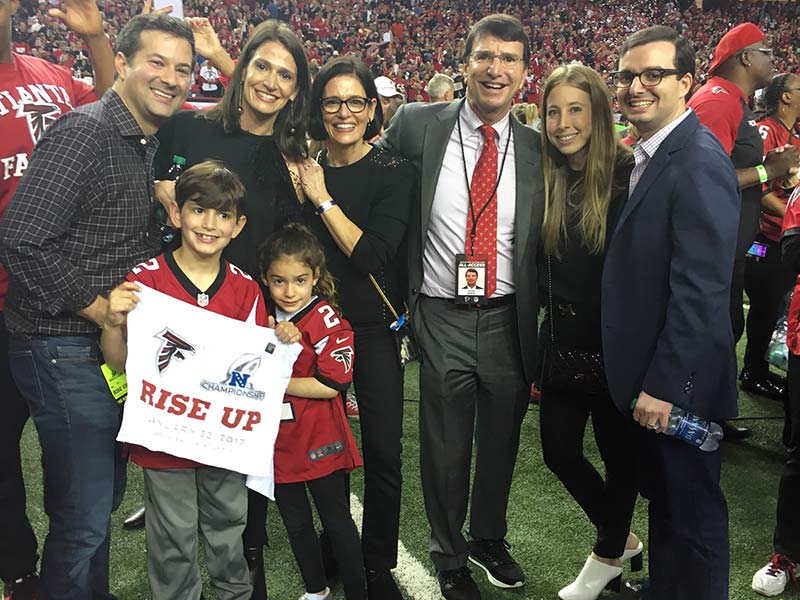 When the Atlanta Falcons take the field in Houston Sunday during Super Bowl LI, Doug Hertz, chair-elect of the Board of Tulane, will be in the stadium cheering them on in the same suit and tie combination that he’s worn to the last three playoff games.

A fan and limited partner of the Falcons organization, Hertz said that he isn’t usually superstitious, but he doesn’t want to break the chain of coincidence that may—or may not—have contributed to the team’s success.

“I’m not saying that’s what got us there,” said Hertz, “But I’ll probably just stick with that attire.”

Hertz said the Falcons’ appearance in the Super Bowl has done a great deal in uniting the citizens of Atlanta and the state of Georgia.

“The whole city is abuzz. It’s on the radio and the television. You walk down the street and people are in Falcons hats and sweatshirts,” said Hertz. “People walk by and say, ‘Rise up.’ It is dominating the conversation in the city.”

During Board of Tulane meetings, when “everyone is working to better the good of Tulane University,” Hertz said it is necessary to avoid the topic of professional football.

“It’s incredibly ironic that we’re in this four-team division of the NFL with strong ties to three of the four teams in the NFC South,” said Hertz. The board includes Gayle Benson (New Orleans Saints) and Jill Glazer (Tampa Bay Buccaneers).

“We’re going to work on getting someone with the Carolina Panthers involved in Tulane.”

On Sunday Hertz’s team plays in the Super Bowl. In 2019, he’ll serve on the host committee when Super Bowl LIII is held in Atlanta.

“This is the most unifying event that will have happened in Atlanta including when we were awarded the Olympics,” said Hertz. “It will create such great pride in our fan base. It has already taken the city by storm.”