There is only one true Blue Dog 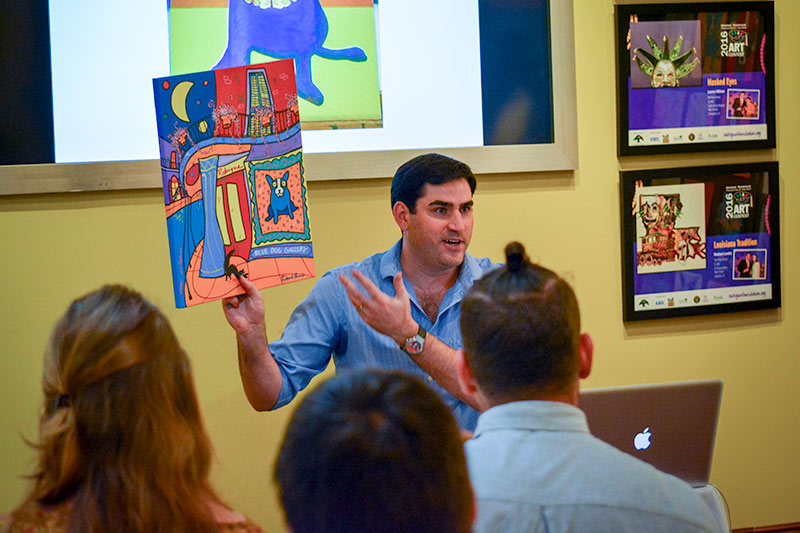 “I grew up in a world where dogs were blue,” Tulane Law alumnus Jacques Rodrigue (L ’07) told dozens of law students who filled a Magazine Street art gallery.

He then proceeded to explain how he protects his father’s beloved Blue Dog from copycats: intercepting illicit cellphone covers shipped in from Mexico; stopping bogus merchandise, like a French Market vendor’s framed Blue Dog “prints” that were just cut from books featuring George Rodrigue’s art; getting sites like eBay to take down listings offering custom-made (but fraudulent) Blue Dog paintings.

And when Jacques Rodrigue saw on Instagram that Ty had come out with an unlicensed Blue Dog-hued Beanie dog with what he described as “pouty lips and take-me-home eyes,” he pursued a copyright infringement claim — and secured a confidential settlement that went to the George Rodrigue Foundation of the Arts.

“In many ways, the law is trying to catch up with artists and the art world.”

“We’ve done a pretty good job of educating the public what can and can’t be done” under copyright law, said Rodrigue, who serves as executive director of the foundation, which was started in 2009.

“There’s the risk, if you weren’t vigilant … that you could lose some rights.”

The discussion with Rodrigue was sponsored by two Tulane Law student groups, the Civil Law Society and the Entertainment and Art Law Society.

George Rodrigue died in 2013. Proceeds from prints of his artwork help his foundation award college scholarships, donate art supplies and support a program that trains teachers to incorporate the arts into every subject in every classroom as a technique to boost learning.

Jacques Rodrigue said he focused on intellectual property law at Tulane, and using his legal skills to protect his father’s brand and legacy requires keeping up with evolving challenges.

“In many ways, the law is trying to catch up with artists and the art world,” he said.