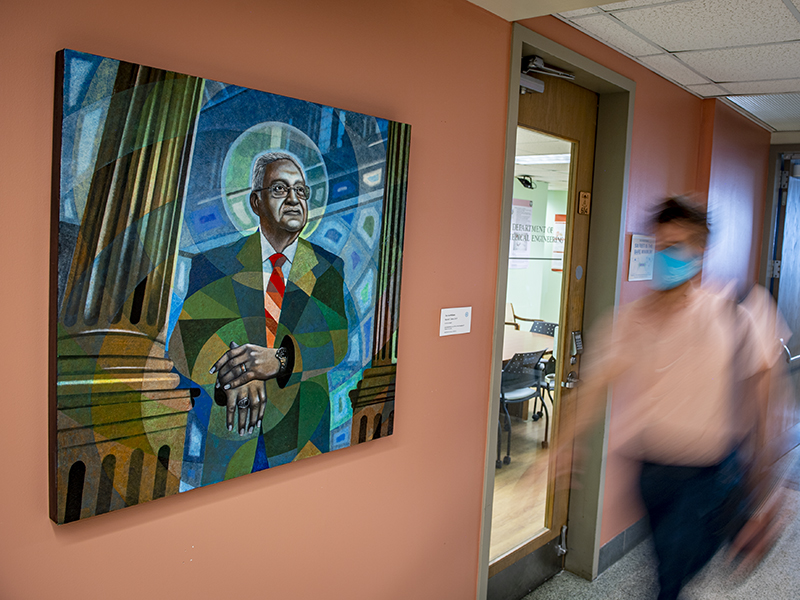 A portrait of Reynold T. Décou, one of the first two Black undergraduates to earn degrees from Tulane University, by artist Carl Joe Williams now resides on the sixth floor of the Boggs Center for Energy and Biotechnology, home of the School of Science and Engineering. (Photo by Paula Burch-Celentano)

Tulane Trailblazers, which was launched by President Michael Fitts in 2019, celebrates individuals who have made Tulane University a more inclusive and diverse academic community. Among the initial trailblazers to be recognized is Reynold T. Décou, one of the first two Black undergraduates to earn degrees from the university.

A graduate of St. Augustine High School in New Orleans, Décou earned two degrees from Tulane —  a Bachelor of Science in 1967 and a Bachelor of Arts in 1979. In the summer of 1963, he enrolled as the first Black student in Tulane’s College of Arts and Sciences, the university’s liberal arts college for men. In fall 1963, Décou moved into an on-campus residence hall, where he experienced intimidation, racial slurs and the insult of bags of human excrement left at his door.

Despite these disturbing and racist experiences, Décou persevered. He moved out of the residence hall later that year but was determined to achieve his goal — completing his academic career at Tulane.

Décou pursued a pre-med curriculum before he switched his major to geology. He was also part of the Air Force ROTC.

“I had some things that almost at times brought me to tears. But at the same time, I said, ‘I have a goal to achieve, I can see that light at the end of the tunnel,’” he said in 2019 of his time at Tulane.

Décou’s distinguished career as a petroleum geologist lasted more than 40 years and brought him to many parts of the world.

Tulane has honored Décou’s legacy with the naming and dedication of the Décou-Labat Residences, formerly known as the Willow Residences. The naming also honors another Trailblazer, Deidre Dumas Labat, the first Black student to earn a degree from Newcomb College, the university’s liberal arts college for women.

A portrait of Décou by artist Carl Joe Williams now resides on the sixth floor of the Boggs Center for Energy and Biotechnology, home of the School of Science and Engineering.

To read more about the Tulane Trailblazers, click here.