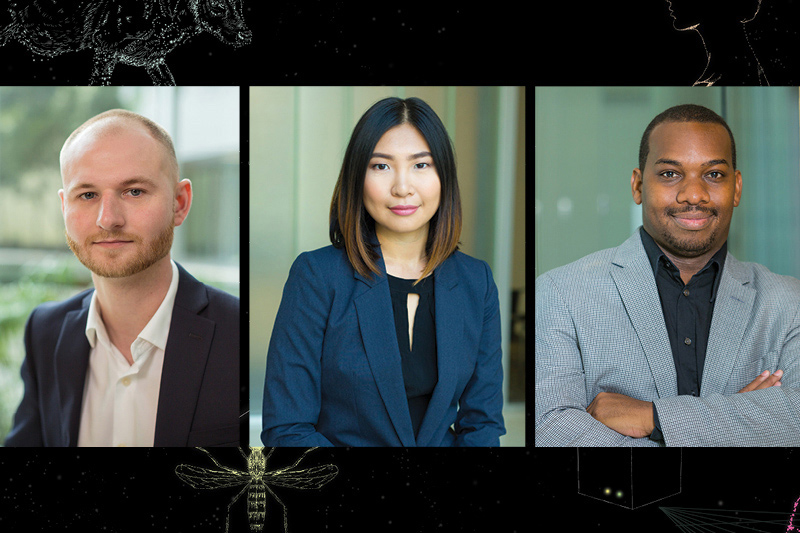 Nick Pashos, Mei Wang and Jason Ryans are recipients of National Science Foundation Innovation-Corps grants. They, along with other Tulane doctoral students and faculty mentors, were awarded $50,000 grants during the past few years to look into the marketability and viability of their “bench science” as they develop new products to improve lives. (Photos by Rick Olivier)

The world of bioinnovation is the science that propels mere mortals known as scientists into visionaries who solve the most complicated medical conundrums today. In the relatively new field that constantly strives to solve the perplexing puzzles at the nexus of mechanics and biology, Tulane University is producing dynamic solutions to some very complex problems. If curing lung disease and cystic fibrosis, for instance, seems like it could be decades away, there is one researcher who has a decidedly different notion of that timetable.

“Think organogenesis,” said Bruce Bunnell, director of Tulane’s Center for Stem Cell Research and Regenerative Medicine and professor in the Department of Pharmacology in the School of Medicine. “The days of having to sign up organ donors, probably in the next decade, will come to an end, in theory. We’ll be able to grow the organs in laboratories.”

This medical breakthrough is particularly important when it comes to replacing human lungs. A matching donor can give up a kidney and still survive, and liver cells regenerate, so whatever tissue is donated grows back, but living people cannot donate a whole lung. That’s why Bunnell is working so diligently to produce lungs in the lab.

One of Bunnell’s PhD students, who has been working with him on the stem cell research to generate new lungs, recently came to him with an idea straight out of the box.

Editor's note: This article appeared first in the September 2017 issue of Tulane magazine.

Lab to Life
Tulane is the No. 1 private college for part-time jobs
Stack up
Photo project showcases student perspectives on campus life
Buzzing about urban beekeeping