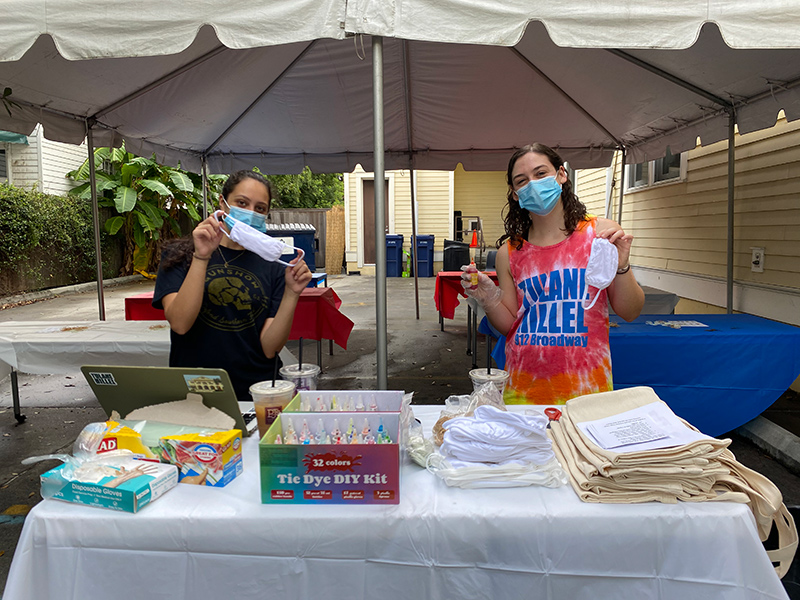 Tulane Jewish Leaders, open to all Tulane undergraduate students, offers students the opportunity to create and develop their own community-driven programs and events. Students recently created a craft experience in which they created tie-dye face masks for themselves and for donation. (Photo provided by Tulane Hillel)

The Tulane Jewish Leaders (TJL) program by Tulane Hillel provides students, both Jewish and non-Jewish, the opportunity to create their own impactful community programming and events reflecting diverse interests while building connections and leadership skills.

Open to all Tulane undergraduate students, the program has been offered by Tulane Hillel for the past 10 years, with students creating more than 130 community programs annually. The goal of the program is for students to get involved in existing programs created by other student leaders, as well as develop their own programs centered around their interests, incorporating a community-driven element. 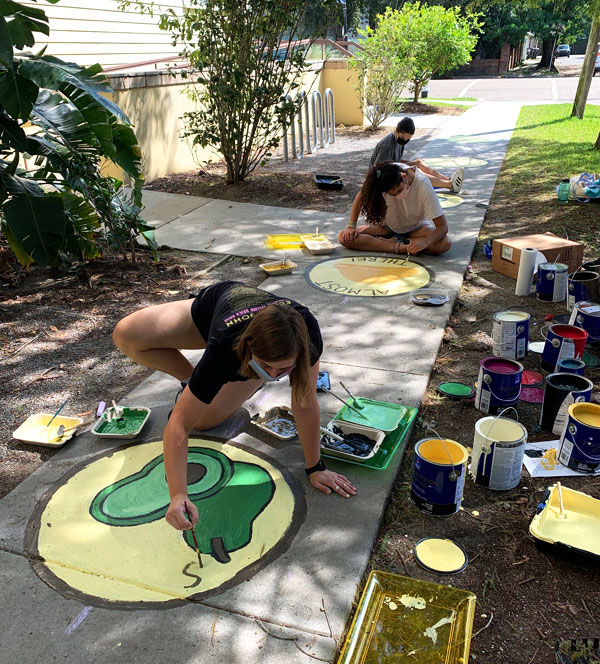 Students in TJL recently created a mural outside Tulane Hillel’s restaurant, Rimon, to show others where to stand while waiting for their food and to remind them to socially distance.

Liza Sherman, chief operating and programs officer at Tulane Hillel, said students have the ability to create programs around topics and ideas about which they are passionate.

“It’s totally what students want to do and when they want to do it,” she said.

Sherman said there are five staff mentors who assist students with honing and developing their ideas into programs. Staff mentors also help students find ways to become involved in assisting and collaborating with other students’ programs, bringing fresh perspectives.

“Typically, on a program planning committee, it’ll be a combination of friends that someone with an idea might recruit to help, along with one or two new people coming together to work on a team to develop the project and have a great event.”

Julia Barron, a senior majoring in Spanish, has been involved in Tulane Jewish Leaders since she was a first-year student. She had a background in creating programs for her Jewish youth group in high school. TJL offered her the opportunity to continue that and to become more involved in the creation process.

“I enjoyed how accepting the program was of a variety of different ideas and provided me with the autonomy to be in the ‘driver's seat’ of my interests and create programs around them,” Barron said.

Over the years, Barron has designed programs such as a sustainable clothing swap, an annual Friendsgiving, which gathers the community over a free Thanksgiving meal, and “Yak and a Snack,” which includes an afternoon kayaking on Bayou St. John. She also conceived “Lift Like a Girl,” a program in partnership with the Reily Student Recreation Center that provided young women the opportunity to learn the fundamentals of lifting weights without the pressure of teaching themselves in an often intimidating weight room, and a yoga class that featured a panel of New Orleans-based women discussing their professions.

A number of Tulane Jewish Leaders are active in other organizations or sororities/fraternities, and the program allows those students to cross-collaborate as well, Sherman said.

“We’re all about driving connections.”

The program has facilitated partnerships with local organizations in the city, such as Grow On Urban Farms, Coalition to Restore Coastal Louisiana, Covenant House, The Edible Schoolyard, Anna’s Arts for Kids, and restaurants, such as Saba, Lebanon’s and Maple Street Patisserie.

During the COVID-19 pandemic, Tulane Jewish Leaders have still been able to host programming within public health guidelines. Sherman said recent programs have moved outside and practice socially distancing. When food is involved, it has been individually packaged and there is a designated area where students can pick it up.

TJL student leaders recently painted a mural outside Tulane Hillel’s restaurant, Rimon, to show others where to stand while waiting for their food and to remind them to socially distance. Students also created a craft experience in which they created tie-dye face masks for themselves and for donation.

Additionally, programs in the community have been closer in proximity to Tulane Hillel since the start of the pandemic.

“We’ve done a number of meditation walks in Jean Lafitte Park on the West Bank, so we’re now probably going to do those in Couturie Forest in City Park,” Sherman said as an example.

Applications are being accepted for new Tulane Jewish Leaders, now through Sunday, Oct. 25.

Sherman said the program is seeking students who are action-oriented and who want to make a positive impact on the community.

“I believe that being a part of TJL has been the most fundamental part of my college career because of its unique ability to provide me with a platform to plan programming related to my passions and become deeply involved in all the fundamental processes that go along with the planning, such as working closely with a team, delegating responsibility, responding quickly to changes and, most of all, creativity,” Barron said.