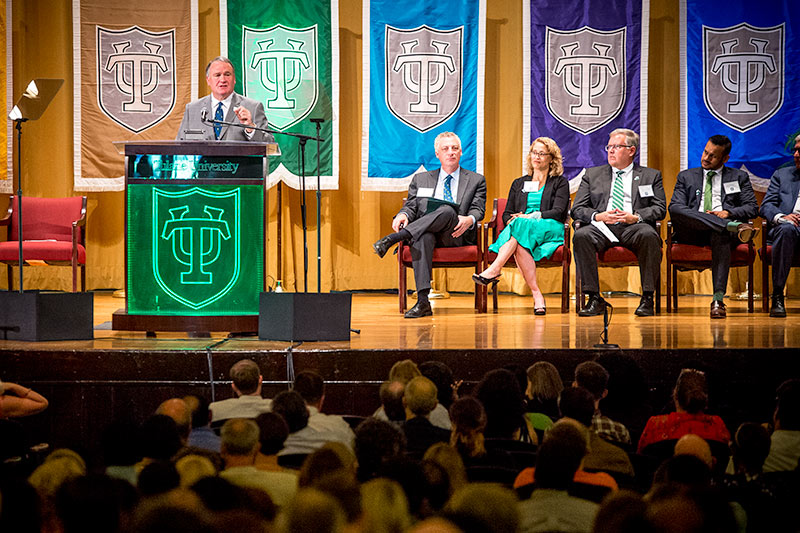 Faculty and staff received the latest on the university’s progress and financial standing directly from President Mike Fitts during the inaugural State of the University address this week. (Photo by Ryan Rivet)

Faculty and staff who gathered in McAlister Auditorium on the uptown campus Wednesday, Aug. 23, for the inaugural State of the University address heard good news from Tulane University President Mike Fitts.

“We are at a truly pivotal moment in Tulane’s 183-year history,” Fitts said. “Each and every one of you — whether you tend to our beautiful quads or keep the accounts that help us function — are essential to our shared mission.”

Fitts listed the university’s recent achievements, including a string of superlatives from 2017 Princeton Review rankings, where, among other honors, Tulane nabbed top spots in the best college city, best-run university, best quality of life and community engagement categories.

“Tulane has never looked better, and that is a direct output of your hard work and passion.”

Fitts also noted that Tulane’s ranking in U.S. News rose from 54th to 39th in three years — improving more than any other school in the publication’s top 100.

He also touted the university’s growth, pointing to campus construction projects such as the business school expansion.

The Office of Undergraduate Admission got a special shout-out for its success in increasing the diversity of the incoming class — and a leap in students’ average SAT scores.

“The average SAT score has jumped 48 points in the last three years, and it’s now a whopping 1449 for the incoming class,” said Fitts.

Twenty-two percent of the incoming class are students of color. And Tulane is welcoming approximately 120 international students to campus.

Fitts additionally announced some firsts for faculty and staff members.

Starting Oct. 1, Tulane will offer four paid weeks of parental leave to staff members welcoming the birth or adoption of a child.

“This award is for the colleague who brought in the first king cake of Mardi Gras season — or the one who is covered head to toe in green for every single home game,” said Fitts, who then surprised Ayoubi by honoring him as the very first recipient of the award.

Elated, Ayoubi seemed to float off stage with his newly acquired statuette and congratulatory bouquet of balloons in hand.

“Tulane has never looked better and that is a direct output of your hard work and passion,” said Fitts.

Like this article? Keep reading: Diversity rises with incoming class