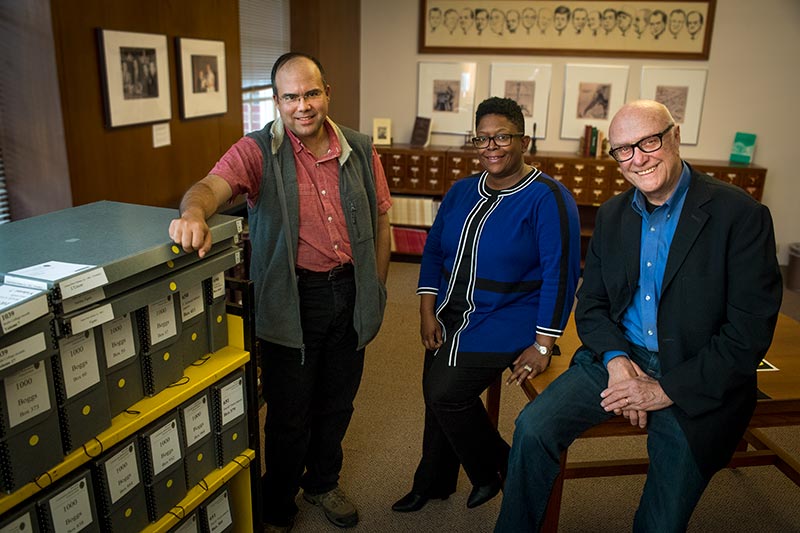 Richard Campanella, Kara Tucina Olidge and Lawrence Powell are members of the editorial board of the new book 'New Orleans & The World: The Tricentennial Anthology.' (Photo by Paula Burch-Celentano)

As New Orleans gears up for its tricentennial celebration in 2018, a new book entitled New Orleans & The World: The Tricentennial Anthology will share the story of the Crescent City’s founding and illuminate the global impact of the city’s cultural contributions, including its unparalleled culinary tradition and resounding musical legacy, over the course of 300 years.

The anthology is being produced through a partnership between The New Orleans Convention and Visitors Bureau (NOCVB), the New Orleans Tourism Marketing Corporation (NOTMC) and the Louisiana Endowment for the Humanities (LEH).

The LEH has additionally assembled an editorial board of leading local scholars to oversee production of the publication. Board members include Richard Campanella, a senior professor of practice within the Tulane School of Architecture, Kara Tucina Olidge, executive director of the Amistad Research Center, and Tulane University professor emeritus Lawrence Powell.

"The goal is to highlight the city’s cultural, historical, and political influence on the world."

“It’s a natural fit for the LEH to handle this project,” said Campanella, who has been researching the city’s historical geography for the past 22 years.

“One is on the formation of the delta plain, and the other is on the urban development patterns of the city and architecture,” he said.

“New Orleans has an interesting, colorful history. The goal is to highlight the city’s cultural, historical, and political influence on the world,” said Olidge. “In addition to serving on the editorial board, I’m submitting a chapter on the civil rights movement in New Orleans and its relationship to the larger movement within the U.S.”

New Orleans & The World: The Tricentennial Anthology is scheduled to publish in the fall of 2017.

What Tulane talked about in 2016
Tulane partners with Café Reconcile
Getting patients back in the game
Tulane Eats! Apple strudel
Night lights