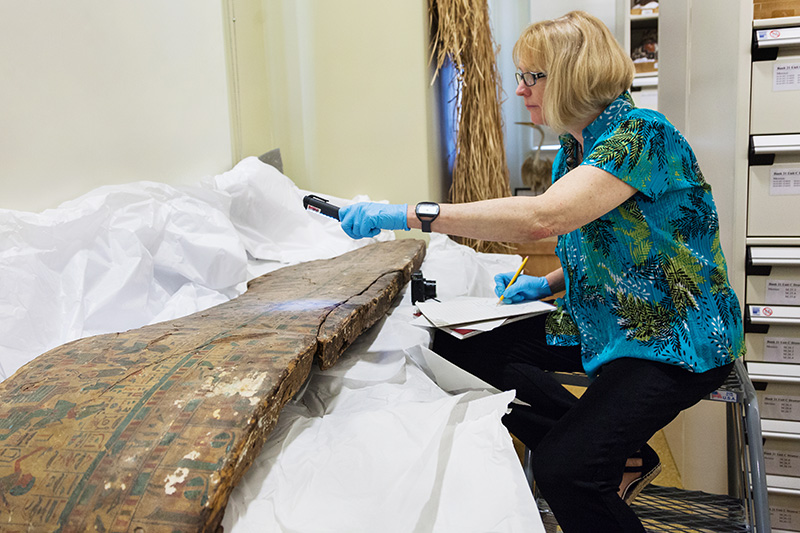 Conservator Mimi Leveque examines part of the coffin of Amenemope, which is located within the Middle American Research Institute (MARI) at Tulane University. (Photo by Rene Guitart courtesy of MARI)

The Middle American Research Institute (MARI) will utilize a $6,000 grant from the National Endowment for the Humanities (NEH) to implement a long-term preservation plan for Tulane’s Ancient Egyptian Collection.

The grant, secured in 2015 by Melinda Nelson-Hurst, a research associate in the School of Liberal Arts' Department of Anthropology, and Marcello A. Canuto, director of MARI, was primarily used to arrange for conservator Mimi Leveque to visit the institute and conduct a general preservation assessment of the collection. Leveque made recommendations for conservation treatments and storage improvements.

The Egyptian collection at MARI includes three wooden coffins and two sets of human remains — one mummified female and one mummified male, which date back to 850 B.C.E.

“This helped us form a long-term plan for making the collection as accessible as possible in the space that we have.”

— Melinda Nelson-Hurst, research associate in the Department of Anthropology

“The mummies were both unwrapped as part of public lectures in the 1850s,” said Nelson-Hurst, noting that they were used in a traveling exhibit produced by George R. Gliddon.

“The most critical item that stood out from the conservator’s report was her recommendation to rehouse our male mummy,” said Nelson-Hurst.

As the remains were previously encased in cardboard boxes filled with foam padding, Nelson-Hurst and Parris replaced the cardboard units by constructing corrugated coroplast bins and lining them with quilt batting and polyethylene foam.

“It was something that we could do in the short-term to improve conditions,” said Nelson-Hurst.

The MARI team also used remaining NEH funds to purchase and place environmental monitors throughout the collection’s location in Dinwiddie Hall on the uptown campus.

“We purchased one for each of our storage areas. We have them set to record temperature, relative humidity and dew point every hour to prevent mold and mildew,” said Parris.

Canuto, Nelson-Hurst and Parris have also used donations from local individuals and organizations, like the Zemurray Foundation, to enhance the collection’s storage.