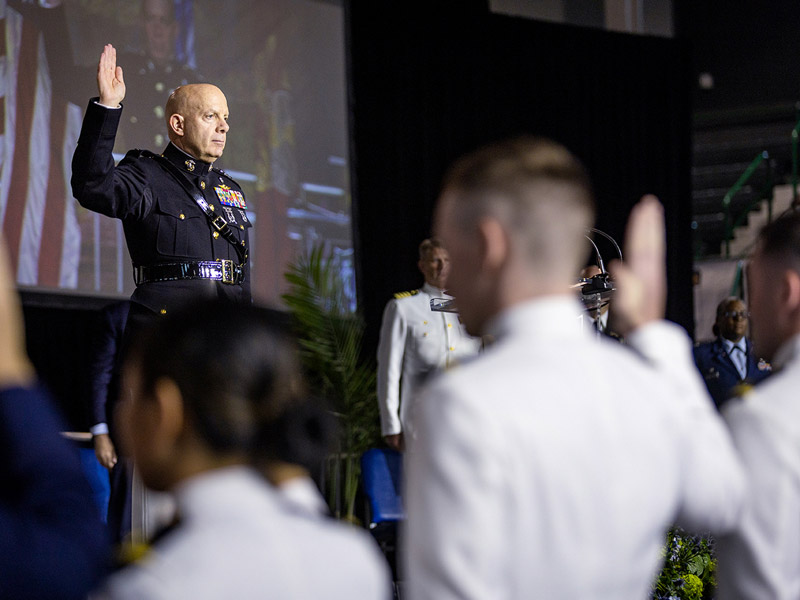 Forty-one years after he took the U.S. Marine Corps Oath of Office at Tulane, Gen. David H. Berger, engineering alumnus and 38th commandant of the U.S. Marine Corps, returned to the university’s uptown campus as a guest of honor at the Tulane Reserve Officers Training Corps’ Joint Commissioning Ceremony.

Berger gave the keynote address and commissioned 18 new officers at Avron B. Fogelman Arena in the Devlin Fieldhouse on May 21. Earlier that day, Berger received a Doctor of Humane Letters at Tulane’s Unified Commencement Ceremony, which was held in Yulman Stadium.

The new officers represented four branches of the U.S. military — Marine Corps, Navy, Air Force and Army — and three additional New Orleans universities, which each have an affiliation with one or more of Tulane’s ROTC units. This year, the graduates came from Tulane, Xavier and Dillard universities and the University of New Orleans.

“When you wake up tomorrow, you will have the values of the nation on your shoulders ... you will be ready for it.”

President Michael A. Fitts reminded the audience that Tulane’s NROTC history dates to 1938 and that the university has graduated more than 2,000 officers from the program.

Fitts said the Class of 2022 officers are following in the footsteps of notable alumni such as Berger (Class of 1981); Col. Doug Hurley (Class of 1988), who delivered the keynote address at the 2020 Tulane Commencement; and Ensign Richard O. Werlein (NROTC Class of 1945), whose prowess as a hydrographer prompted the U.S. government to name one of the Windmill Islands after him.

“Whether you plan to lead, command, discover or explore, know that your legacy includes your alma mater, your classmates, and the friends and family who supported you along the way,” Fitts said. “Thank you for connecting your passion with something bigger than yourselves.”

Berger challenged the newly commissioned officers to always consider their fellow Marines, airmen, sailors and soldiers first. “That is what it means to be an officer,” he said. “You must give them your best self every day. They deserve nothing less.”

“When you wake up tomorrow, you will have the values of the nation on your shoulders. Like your predecessors, because you were so well prepared, you will be ready for it. You will do us all proud,” he continued.

“Personal conviction, courage, integrity and ingrained sense of service to your nation: Those are the traits that distinguish you from all others.”

Mark Shreve, a Mandeville, Louisiana, native who was sworn in as a second lieutenant in the Marine Corps, said he was honored to be in Berger’s presence.

“To have somebody of (Berger’s) stature to come down here to commission us was truly humbling, because it just showed us the dedication and the honor that he gives towards even the … newest officers,” Shreve said.

Shreve, who graduated this year with a history degree, will move on to an officer’s training school in Quantico, Virginia, before he receives an official military occupational specialty. 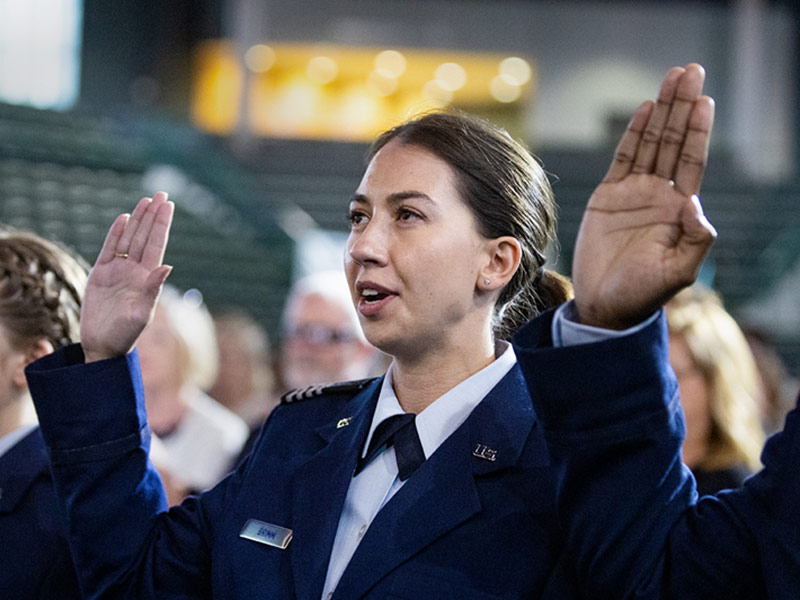 Catherine Grimm takes the Oath of Office. A 2022 graduate of Tulane Law School, Grimm is now a second lieutenant in the U.S. Air Force. (Photo by Rusty Costanza) 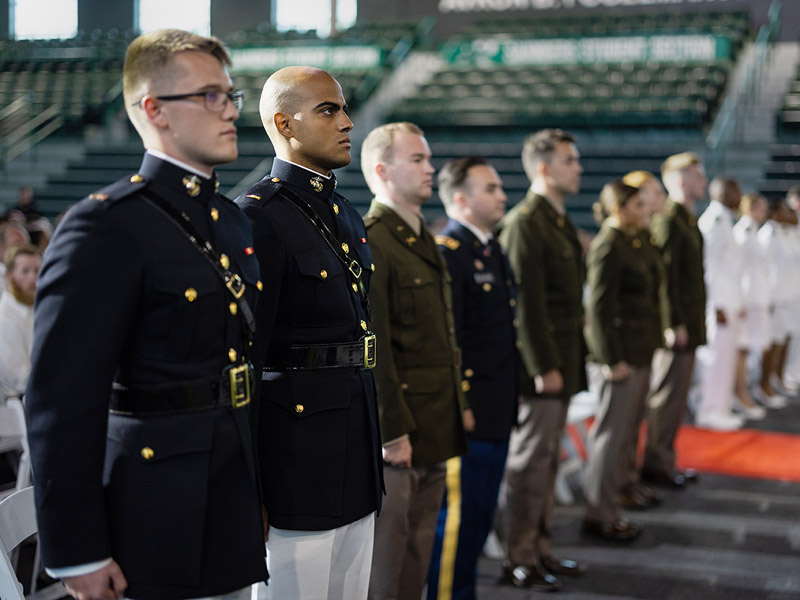 New officers in the Marine Corps, Army, Navy and Air Force stand at attention during the ceremony. Mark Shreve, far left, received a history degree from Tulane and is now a second lieutenant in the Marine Corps. Second from left, Jason Florentino of Dillard University is also a new Marine Corps Officer. Tulane’s NROTC program has an agreement with ROTC students at several universities around New Orleans. (Photo by Rusty Costanza)