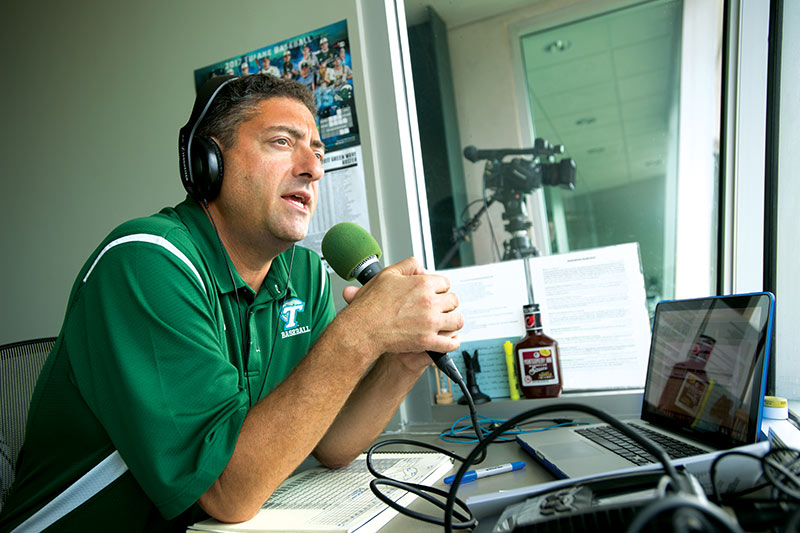 "I’m literally doing my dream job. I wouldn’t trade it for the world.”

Each article included a link, enabling even those on the other side of the world to hear the jubilation in Graffagnini’s voice as he described Jake Rogers’ game-winning homerun against Ole Miss in June 2016.

Nearly a year later, Graffagnini, who is celebrating his 10th anniversary as the voice of the Green Wave, thinks back to that call and wonders what the fuss was about.

“If we were playing Nicholls State on a Tuesday night in front of 100 people, I’d have called it the exact same way,” he said. “I guess the only difference is that the stage was bigger.”

A native New Orleanian who played high school baseball at Jesuit and pitched at Northeast Louisiana University before suffering a career-ending injury, Graffagnini has been a fixture at Tulane since 1992 while studying broadcasting at Loyola University.

With his brother Kyle on the Tulane baseball team, Graffagnini hung out at practice and got to know Ken Berthelot, then the voice of Green Wave.

Graffagnini eventually became the voice of Green Wave baseball and in August 2007 was hired by Tulane and IMG Sports to handle play-by-play duties for football, baseball and men’s basketball.

Not a day goes by that he isn’t grateful for the opportunity.

“I walk into the ballpark, and it’s like 75 degrees and I’m literally doing my dream job,” he said. “I wouldn’t trade it for the world.”