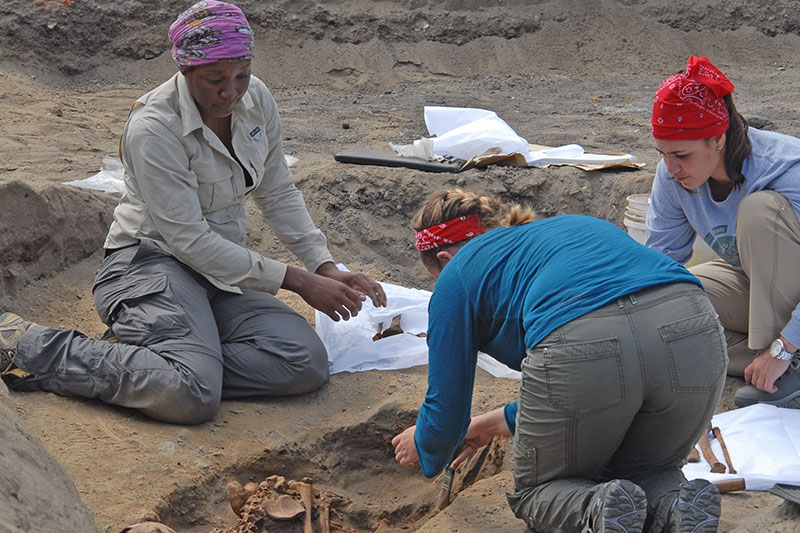 Researchers from Tulane and the National University of Trujillo in Peru work at the site of a mass child sacrifice in northern Peru. (Photo courtesy of Tulane professor John Verano)

A Tulane University professor’s research into the world’s largest mass sacrifice of children and llamas in northern Peru continues to garner international attention, with the findings being published in one of the world’s top scientific journals.

Anthropology professor John Verano said the article in PLOS ONE  (Public Library of Science) presents for the first time the science behind the discovery, which he and Gabriel Prieto, an assistant professor of archaeology at the National University of Trujillo in Trujillo, Peru, led between 2011 and 2016.

The discovery of the remains of 140 children and 200 young llamas at the Huanchaquito-Las Llamas site was first reported in April of 2018 in a National Geographic exclusive. It is considered the largest sacrifice of its kind known from the Americas.

“The article provides for the first time the raw data and analytical results for radiocarbon dating of the sacrifice, DNA analysis, and carbon and nitrogen stable isotopes as indicators of diet and possible geographic origins of the children,” Verano said.

“This archaeological discovery was a surprise to all of us. We had not seen anything like this before."

“It also provides raw data and comparative analysis of cranial deformation as a potential marker of geographic and ethnic origins of the children, includes field maps, photographs, and contextual information on the excavations,” he said.

Human and animal sacrifices are known from a variety of ancient cultures, often performed as part of funerary, architectural, or spiritual rituals. But very little evidence of large-scale child sacrifice is known from ancient Peru.

This study reports the findings of excavations between 2011 and 2016 that revealed hundreds of bodies buried in an area of approximately 700 square meters.

Except for three adults the human remains were exclusively children.  The animal remains, all juvenile, were identified as most likely llamas, but possibly alpacas.

Anatomical and genetic evidence indicates the sacrificial victims were both boys and girls between the ages of 5 to 14 years. Cut marks transecting the sternums and displaced ribs suggest both the children and llamas had their chests cut open, possibly for ritual removal of the heart.

The remains were radiocarbon dated to around 1450 AD, during the height of the Chimú state. A thick layer of mud overlaying the burial sediments indicates that this mass killing was preceded, and perhaps inspired, by a major rainstorm or flood.

The authors note that this sacrifice involved a large investment of resources for the Chimú culture. Through future study, they hope to better understand the ritual through its victims, by analyzing the life histories and cultural origins of the sacrificed children.

“This archaeological discovery was a surprise to all of us,” Verano said. “We had not seen anything like this before, and there was no suggestion from ethnohistoric sources or historic accounts of child or camelid sacrifices being made on such a scale in northern coastal Peru.”

“We were fortunate to be able to completely excavate the site and to have a multinational field and laboratory team to conduct the excavation and preliminary analysis of the material. This site opens a new chapter on the practice of child sacrifice in the ancient world.”