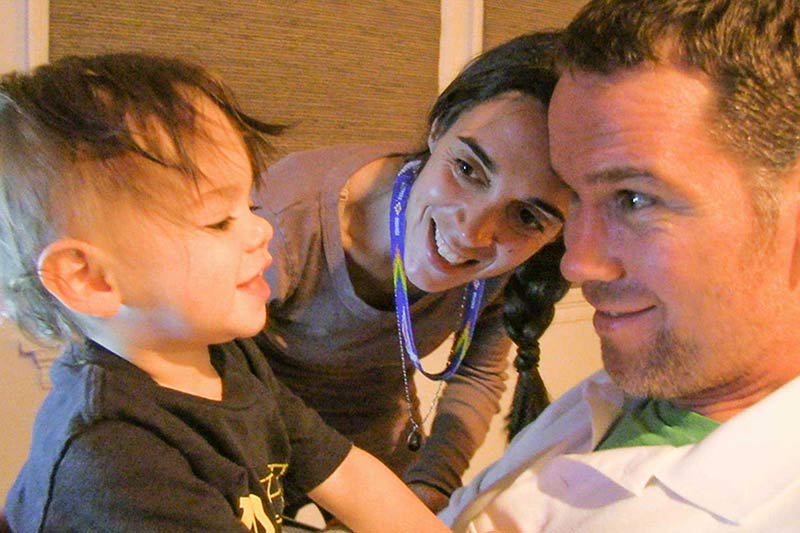 Steve Gleason, far right, shares a moment with his son, Rivers, far left, and wife, Michel, center, in the documentary film “Gleason” in select theaters Friday (July 29). Gleason earned an MBA in finance from Tulane in 2011. (Photo from gleasonmovie.com)

This must-see documentary film on the life of Tulane University alumnus and former New Orleans Saints defensive back Steve Gleason will remind viewers to treasure their days. Gleason was diagnosed with ALS at the age of 34 and was given a maximum life expectancy of five years. The documentary began as a video journal for his wife, Michel, and their unborn son. It later “expands to chronicle Steve’s determination to get his relationships in order, build a foundation to provide other ALS patients with purpose, and adapt to his declining physical condition—utilizing medical technologies that offer the means to live as fully as possible.”

In this new movie, which includes several scenes filmed on and around the uptown campus of Tulane, a set of stressed-out moms stray off the beaten path of “conventional” motherhood and pave their own way straight to a “wild, un-mom-like binge of long overdue freedom, fun and self-indulgence.” The movie stars Mila Kunis, Kristen Bell, Kathryn Hahn, Jay Hernandez, Clark Duke, Annie Mumolo, Jada Pinkett Smith and Christina Applegate.

When Absolutely Fabulous premiered in New York City this month, Aryanna Gamble, communications and marketing coordinator at Tulane, had a VIP invitation thanks to her outstanding costuming ability. Gamble was the winner of a national contest in which fans were asked to recreate a scene from the movie, which is based on a British TV series of the same name that followed the hilarious antics of two women—Eddy and Patsy—working in the fashion industry. Her prize included a seat in the July movie premiere, flight and hotel accommodations, a $1,000 shopping spree at Macy's and a makeover.