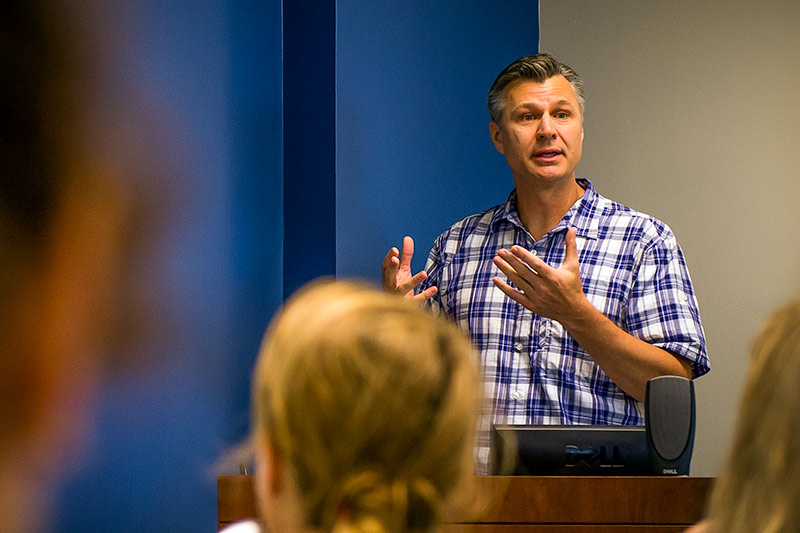 Douglas Wiebe, associate professor of biostatistics and epidemiology at the University of Pennsylvania’s Perelman School of Medicine, presented his study on gun violence, one of only a handful of NIH-funded studies on that topic, at the Tulane School of Public Health Wednesday (June 29). (Photo by Sally Asher)

A book from the 1950s helped form Douglas Wiebe’s study of gun violence.

One Boy’s Day, an examination of a Midwestern boy’s  footsteps and behaviors over 14 hours, prompted Wiebe, over 50 years later, to track Philadelphia adolescents who had been treated for assault wounds.

Wiebe, associate professor of biostatistics and epidemiology at the University of Pennsylvania’s Perelman School of Medicine, presented the study as part of the Jane Wilson Smith Lectureship Series. The lecture took place Wednesday (June 29) at the Tulane University School of Public Health and was co-sponsored by the Mary Amelia Douglas-Whited Community Women's Health Education Center (MAC).

“We needed to develop a new way to learn about people at the time they were assaulted and learn about them leading up to the assault,” Wiebe said.

Wiebe's team interviewed over 600 males between ages 10-24 to learn more about their actions on the day of the assault.

They also examined Philadelphia’s cityscape – especially the location of alcohol sales, vacant lots and abandoned houses – to determine how the built environment contributes to violence.

The study, Wiebe says, gives context to the moments leading up to an assault, and the results “advance our understanding of urban violence.” It is one of a few studies on gun violence funded by the National Institutes of Health.

“Ultimately we’d like to learn about the built environment to make the environment safer,” Wiebe added. Wiebe is working with MAC on a similar local project, too, said director Katherine Theall.

“There’s not a lot of sponsored research out there [on gun violence] … if we can get data on what happens to people before they are injured with gun violence or [in] other kinds of assaults, it will give us clues to affect public health,” said Jeanette Gustat, associate professor of clinical epidemiology in the Tulane University School of Public Health and faculty co-investigator with the Tulane Prevention Research Center, which addresses the relationship between the built environment and health.