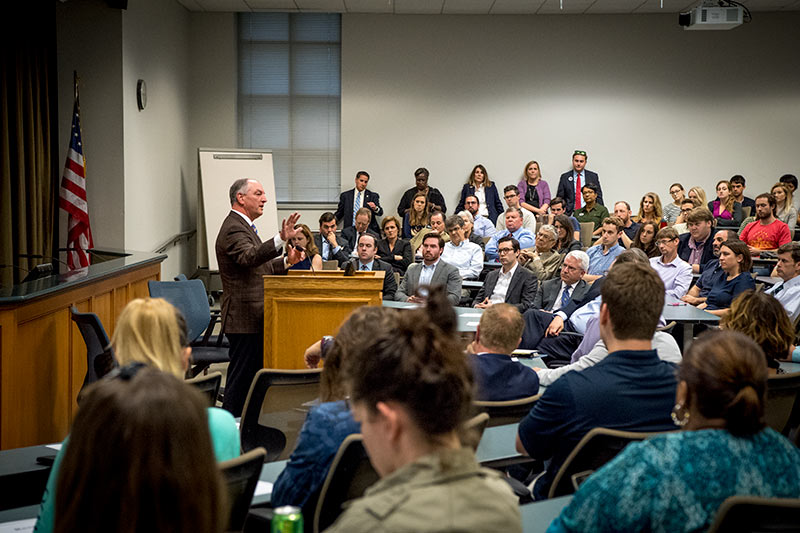 Louisiana Gov. John Bel Edwards discussed the value of legal training, along with current challenges facing the state, with a standing-room-only audience at Tulane Law School on Wednesday (Oct. 26). (Photo by Paula Burch-Celentano)

A lawyer who started his career in his family’s small-town practice, Louisiana Gov. John Bel Edwards told Tulane University Law School students that he has called on his legal training to tackle problems as a legislator and now as the state’s top elected official.

During his first nine months as governor, Edwards faced multiple tests, including a billion-dollar budget crisis, record flooding twice in different parts of the state and a fatal police shooting of a civilian that prompted protests in Baton Rouge followed by an attack that killed three officers.

Edwards said the combination of his military background, legal education and courtroom experience have “served me pretty well to understand the challenges and to try to respond to them effectively.”

“We advocate on behalf of our clients, but we don’t ever have to be personally at odds with opposing counsel. … That’s what lawyers bring to the legislature and to public office.”

Edwards graduated from the U.S. Military Academy at West Point, spent eight years as an Army Airborne Ranger and then clerked for Judge James Dennis on the 5th U.S. Circuit Court of Appeals in New Orleans before returning to his hometown of Amite, Louisiana. He was elected to the state House of Representatives in 2007 and then governor in 2015.

“I wasn’t 100 percent sure what I wanted to do when I got out of the Army, but I knew a law degree would prepare me,” he said, pointing out that the training can be helpful in business, government and other fields.

A Democrat in a heavily Republican state, Edwards cautioned against easy labels and underscored that lawyers can play a role in turning down the heat of politics and improving governance. He said he believes in bipartisan problem-solving and remaining cordial with those who see an issue differently.

“One of the things that has prepared me for that is being a lawyer,” he said. “We advocate on behalf of our clients, but we don’t ever have to be personally at odds with opposing counsel. … That’s what lawyers bring to the legislature and to public office.”