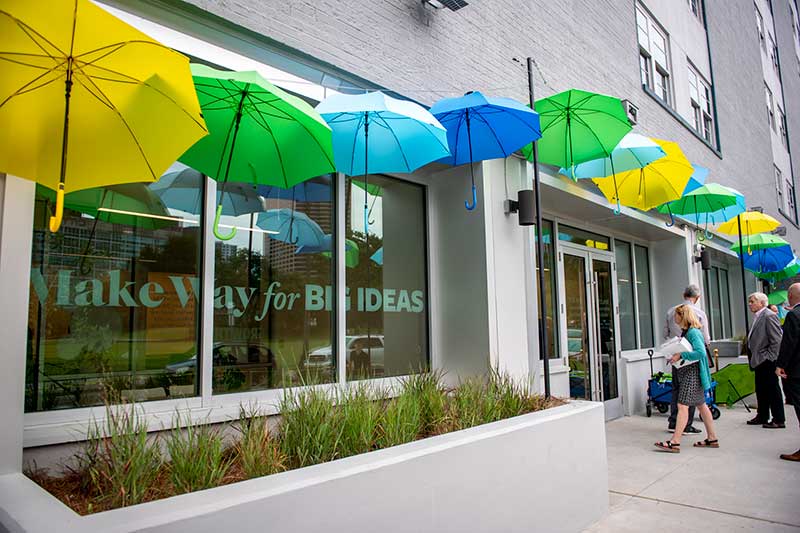 The Innovation Institute, which is located at Thirteen15, the new residential and retail development on Tulane’s downtown campus, was dedicated on Thursday, June 16. The institute's mission is to bring to the market the ideas and discoveries of Tulane faculty, researchers, staff and students, as well as local innovators, to fuel innovation in the Gulf South. (Photo by Paula Burch-Celentano)

“This is a magical moment for Tulane University,” said President Michael A. Fitts on Thursday, June 16, as he dedicated the Innovation Institute located at Thirteen15, the new residential and retail development on Tulane’s downtown campus.

The Innovation Institute heralds the “redevelopment and reimagining of our downtown campus, which will fundamentally transform not only Tulane University but the city of New Orleans and its economy.”

The Innovation Institute is “a direct result of investments in research at Tulane,” said Fitts, noting the 50% jump in research funding between 2017 and 2021 with anticipation for another record year in 2022.

“Out of that explosion in research, the Innovation Institute will help advance Tulane’s most promising ideas for entrepreneurial development, creating new startups, accelerating those companies while fully engaging with the innovation and entrepreneurial communities in New Orleans,” said Fitts.

The Innovation Institute will serve as a “convener, collaborator and motivator” for startup talent in the community — and at Tulane, said Patrick Norton, senior vice president and chief operating officer. Driven by the university’s “core strengths in biotech, health sciences, energy, infectious disease and engineering,” the Innovation Institute will “harness and deploy the vast power of Tulane’s top-ranked research enterprise and welcome intellectual assets like never before.”

“Having the full support of President Fitts, the senior leadership team and the Board of Tulane gives me great, incredible confidence that the Tulane Innovation Institute is poised for extraordinary success and impact,” said Gramm.

Robert Priddy is “somebody who has entrepreneurship in his soul,” said Fitts. “His creativity and can-do attitude is infectious.”