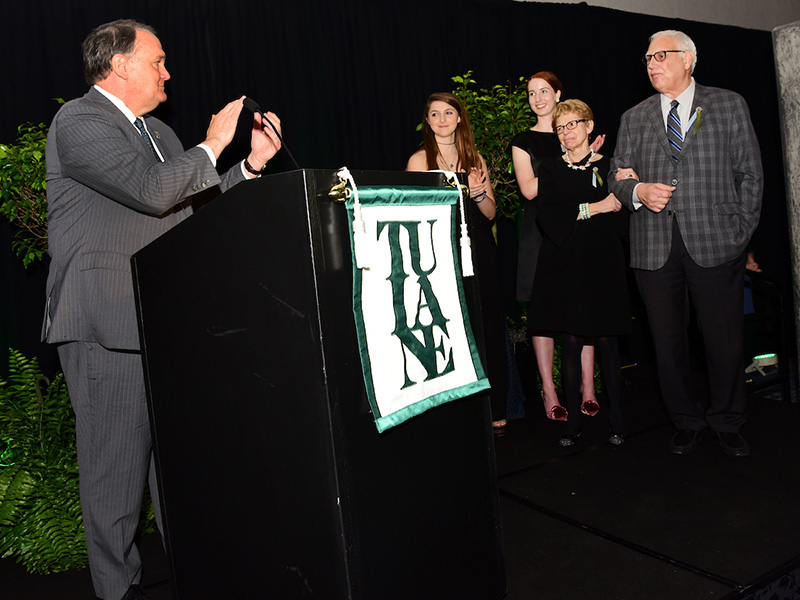 Tulane University President Mike Fitts, left, thanks past Tulane President Scott Cowen and his wife, Marjorie, far right, for their contributions to Tulane. The Cowens were among the inductees into the Paul Tulane Society this month. (Photo by Cheryl Gerber)

Nine of Tulane University’s most generous benefactors were named to the Paul Tulane Society this month during the society’s 12th induction ceremony.

The society honors individuals and organizations that have fulfilled gifts of $1 million or more to the university.

“Each of our inductees tonight has demonstrated exceptional commitment and dedication to Tulane,” said Tulane University President Michael A. Fitts during the March 15 event. “We are honored to recognize you for your outstanding contributions to the advancement of education, research and service — the hallmarks of Tulane University.”

“We are honored to recognize you for your outstanding contributions to the advancement of education, research and service—the hallmarks of Tulane University.”

The Paul Tulane Society currently includes more than 250 members with gifts to Tulane ranging from $1 million to $30 million. Fitts said he has been especially inspired by the generosity of alumni, parents and friends during the university’s most ambitious fundraising campaign ever, Only the Audacious, which has a goal of raising $1.3 billion.