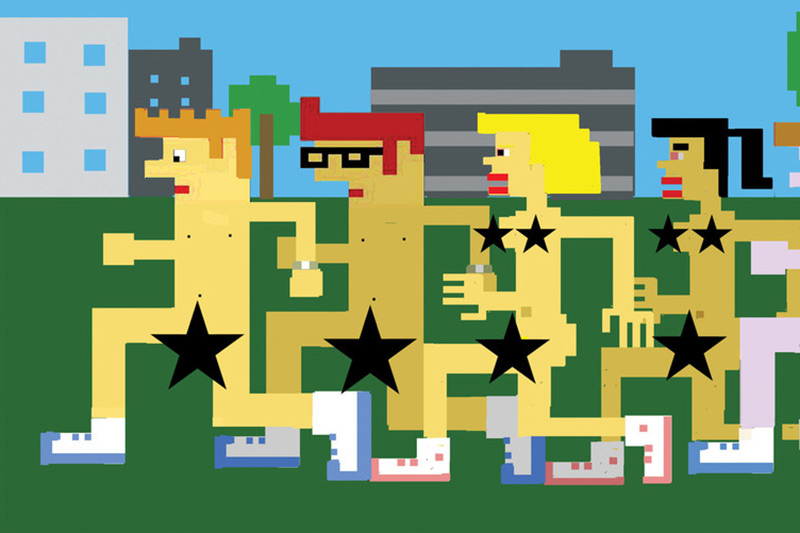 This column first appeared in the June 2016 issue of Tulane magazine.

There’s an old newspaper saying: “No news is good news,” which basically means that it’s all quiet on all fronts, looks like it’s going to be an easy or slow news day.

More common is the converse, when there’s nothing but bad news and more bad news and sometimes it lasts for days, even weeks—at which point one of my old editors at the newspaper here would say, “We could use some UFO sightings!” Translated, he meant something wacky to break up the gloom and doom on Page One would be welcome.

"For younger readers, streaking was a craze that swept college campuses starting in 1973 and got its name because onlookers generally only saw a streak of naked flesh moving at high speed across a public place."

In 44 years in the news media, I pretty much covered it all—tragic fires and shootouts, plane crashes, murders, auto fatalities, collisions on the river, hurricanes, floods—well, that’s enough, you get the idea. So when something came along like a vampire sighting or a nutcase who floated down the Mississippi from Minnesota in a bathtub, or a UFO report, I jumped on that story.

Hitting the rewind button, we’re back in March 1974 on the Tulane campus. It’s late at night on Newcomb Boulevard—near where the original Howard-Tilton Library was housed in Joseph Merrick Jones Hall when I was in school. When the current library opened across the street in 1969, the old library became the law school before it moved down Freret Street in 1994 to Weinmann Hall. Today, Jones Hall houses Classical Studies, the Hogan Jazz Archive, the Louisiana Research Collection and more.

Enough logistics. Seven years of reporting under my belt, I’m standing there with photographer Bill Haber. We have a tip that there are going to be some streakers blitzing the library and the campus that night. We are trained news sleuths so we can sniff things out, figure out where this is going to go down. And it helps that there are 500 or more Tulane students hanging out there, awaiting the moment. Right after 9 p.m., two groups of about eight nude streakers throwing “Krewe of Streak” doubloons each dashed from the hallowed halls of the library. This was like the preliminary bouts leading up to the main event on a boxing card.

For younger readers, streaking was a craze that swept college campuses starting in 1973 and got its name because onlookers generally only saw a streak of naked flesh moving at high speed across a public place. CBS-TV’s Walter Cronkite called it “a grand spring adventure.” Johnny Carson on “The Tonight Show” said it gave new meaning to “big man on campus.”

And some saw this as a very positive activity in the pursuit of higher education at Tulane. “I’ve never seen this many people at the library. This is what this campus needs,” said a Tulane student who identified himself as Steve Rosenberg, 21, of New York City.

Haber recalled that a woman saw him taking pictures and called him “a pervert.” He showed her his press credentials and said, “Ma’am, I’m getting paid to do this. What’s your excuse?”

Later, the crowds moved to a quad between two men’s dorms where a Mardi Gras atmosphere prevailed. Campus security was very tolerant, only getting upset when some firecrackers tossed from one of the dorms landed too close.

About 60 streakers wearing sneakers, masks, body decals, motorcycle helmets and stereo headsets staged a well-planned dash around that area, quartets of mooners did their thing from dorm windows, and nudes strolled on ledges past other windows—in effect, turning the campus into a weird nudist colony for a night. Haber and I were excited his picture and my story made Page One.

Tulane’s streak-ins were mild compared to other campuses. The campus credited with the first streak-in was Stephen F. Austin State University in Nacogdoches, Texas. At that school, so the story goes, there were so many streaking students that the president designated a sanctioned streaking day in 1974, which accomplished absolutely nothing. The streaking continued.

At the University of North Carolina on March 7, 1974, the day after the Tulane episode, there were 1,000 streakers, 100 female. In Athens, Georgia, 1,500 naked students frisked around the University of Georgia campus. Wake Forest had its “Streakin’ Deacons”—and what began as a campus prank became a national craze. Cornell and Princeton did their part, ditto for Mizzou and Texas.

Streakers showed up at Major League Baseball games and the 46th Academy Awards, and country music singer and comedian Ray Stevens recorded “The Streak,” which shot to No. 1 on the charts.

Sociologists tried to tie Watergate, Vietnam, the Kent State shootings, protests and more social issues to the root cause of the craze. The enduring consensus was that streaking was generated by the same mindset that caused mostly male students to see how many of them could cram into phone booths (remember them?) or invade female dorms on panty raids:

Flight for excellence
Simplifying climate change information
Passion for the game
The More You NOLA: Off the wall
Location information