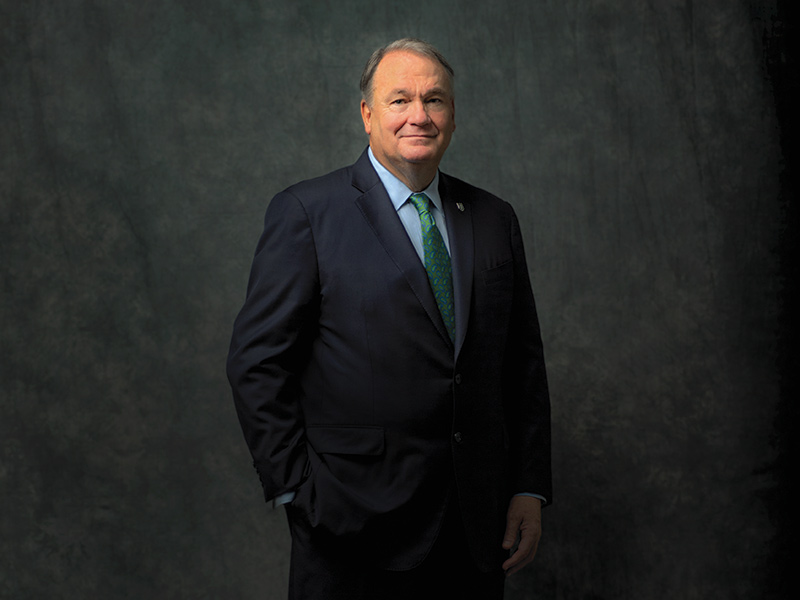 President Michael A. Fitts will continue at the helm of Tulane University until at least 2026, after the Board of Tulane voted unanimously at its June meeting to extend his term as president. (Photo by Paula Burch-Celentano)

When President Michael A. Fitts arrived at Tulane in 2014, he came with a vision to transform the university into one of the country’s pre-eminent academic institutions. Over the past eight years, by leveraging its unique location, culture, people and structure, he has moved Tulane to the next level of academic excellence and elevated its national stature as a leader in interdisciplinary teaching, learning, research and public service. In furthering his vision, Fitts has worked to make Tulane a more supportive home for all by prioritizing equity, diversity and inclusion as a focus of his administration. By harnessing the power of knowledge for the greater good and promoting a growth mindset, he has helped spur unprecedented innovation and discovery throughout the university. And he has won accolades for successfully guiding the university through the COVID-19 pandemic and the aftermath of Hurricane Ida.

In recognition of his successes and the potential to bring the university to even greater heights, the Board of Tulane voted unanimously at its June meeting to extend Fitts’ term as president, ensuring that he will continue at the helm of the university until at least 2026.

“When an organization is on a run of success, you can sense the passion, the excitement, on the part of everyone involved,” said Carol Lavin Bernick, CEO of Polished Nickel Capital Management and chair of the Board of Tulane. “President Fitts came to Tulane with a clear plan and strategy on how Tulane could realize its fullest potential and value as a force for good. He is achieving this plan and has inspired the entire Tulane community to move the university ever forward.”

Fitts said he is “deeply honored” by the Board’s action.

“I am as enthusiastic about leading this institution as I was on the first day of my presidency,” Fitts said. “The progress, growth and upward trajectory of Tulane is the result of the efforts of the most incredible students, faculty and staff anywhere. Together, I know we will continue to dramatically strengthen our scholarship, teaching and research.”

Fitts realized his vision by focusing on a number of clear goals to put the university on a path of rapid growth and forward momentum. He expanded and deepened Tulane’s teaching, learning and research by leveraging the university’s unique qualities. He focused on attracting the best, brightest and most diverse students, faculty and staff, and enhancing the quintessential Tulane undergraduate experience, including working to build a more welcoming, diverse, equitable and inclusive university for all. Complementing these efforts, Fitts also increased financial support for leading interdisciplinary academic programs throughout the university while making major improvements and expansions to the footprint of the university.

These efforts turned out to be game-changers for Tulane.

The first order of business when Fitts arrived in 2014 was to strengthen the university’s financial standing. After conducting a thorough operational review, he balanced Tulane’s budget and oversaw the university’s transition to a responsibility-centered management financial model. These efforts gained attention in the national media with Forbes declaring, “Among top-tier colleges, few have improved in financial strength as much as New Orleans’ Tulane University.”

Through Only the Audacious, The campaign for an ever bolder Tulane, Fitts has inspired unprecedented support from alumni and friends across the globe, substantially increasing philanthropic support for the university. As a result, the campaign surpassed its record-setting $1.3 billion goal ahead of schedule, prompting the university to set a new goal of $1.5 billion. Through this fundraising success and strategic financial efforts, Tulane’s endowment has doubled.

The financial overhaul and the Only the Audacious campaign helped power progress in Fitts’ other priority areas, including transforming teaching and learning. To this end, Tulane has greatly expanded and enhanced graduate offerings and restructured the undergraduate honors program to require that students engage in long-term interdisciplinary research and community service. To further enhance teaching and learning, Fitts brought some of the country’s foremost academic leaders to Tulane, as cabinet members and deans. He also launched new programs to support career services, academic advising, and student retention. A new residential quadrangle, opening in fall 2022, will expand Tulane’s academically themed Residential Learning Communities, which enrich the student experience through cross-cultural, cross-disciplinary and social-academic interactions.

As a result of his student-centric model, every incoming class throughout Fitts’ term has broken records in the number of applications, academic achievement and diversity. Fitts has more than doubled annual spending on equity, diversity and inclusion initiatives, hired the university’s first chief diversity officer and launched the Presidential Commission on Racial Equity, Diversity and Inclusion. He has also created pipeline programs to make a Tulane education more accessible to students from all backgrounds.

Another Fitts initiative, the Tulane Trailblazers program, celebrates accomplished, diverse Tulanians through the naming of professorships, scholarships and other honors. Fitts also launched the Tulane Leadership Institute in 2021 to identify and nurture future university leaders.

Tulane’s research enterprise has grown exponentially through Fitts’ promotion of path-breaking interdisciplinary discovery. Sponsored research awards at Tulane increased more than 50 percent under Fitts. He has established nine endowed presidential chairs to be filled with some of the world’s most innovative thinkers and researchers. He has launched numerous interdisciplinary research centers, including the ByWater Institute, the Department of River and Coastal Studies, the Brain Institute, and the Center for Cellular and Molecular Diagnostics. He has also supported entities such as the Center for Environmental Law and the Center for Energy Law.

Under Fitts’ leadership, Tulane’s campuses are undergoing $1 billion in construction and renovations. This includes The Commons, a state-of-the-art dining, meeting, studying and gathering place for students that opened in 2019 and was the university’s largest construction project since Yulman Stadium. Fitts’ master plan includes the renovation of every existing residence hall on campus — a project well underway.

While growing its uptown campus in new and exciting ways and enhancing its National Primate Research Center on the North Shore, Fitts has set Tulane on a historic expansion in downtown New Orleans anchored by the transformation of the Charity Hospital building into a hub of learning, innovation and discovery with laboratories, classrooms, offices and more. The building will also include the Tulane Innovation Institute, a new center designed to bring Tulane breakthroughs and discoveries to market faster while supporting venture creation and spurring economic development throughout New Orleans and beyond.

“Cities throughout the country have been transformed from their core outward thanks to the presence of a national research university located in their downtown,” Fitts said. “We have a once-in-a-generation opportunity to transform New Orleans into a center of biotech innovation that will reap huge economic benefits for our region while creating the latest advances in medicines, diagnosis and outcomes for individuals throughout the world. This is a major part of what makes me so excited for the future of Tulane.”