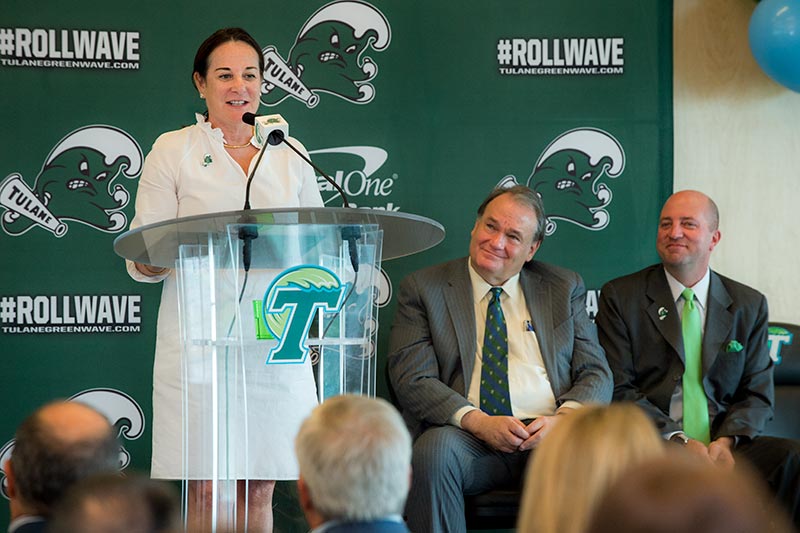 Elizabeth “Libby” Connolly Alexander, a 1984 alumna and member of the Tulane Board, addresses the crowd during a press conference held by Tulane University Athletics to announce that the university’s sailing club will be elevated to intercollegiate varsity status during the 2018–19 academic year. Tulane President Michael A. Fitts and Troy Dannen, Tulane Ben Weiner Director of Athletics Chair, look on. (Photo by Paula Burch-Celentano)

Tulane University Athletics will chart a new course by elevating the university’s sailing club to intercollegiate varsity status during the 2018–19 academic year. Sailing is the first addition to the university’s varsity sports lineup since beach volleyball and bowling were introduced in 2011.

The new program will consist of women’s, coed and racing teams competing within the South Eastern Intercollegiate Sailing Association. The current team will continue throughout the upcoming academic year as a student club.

“This is all due to the extraordinary vision and generosity of Libby and Robert Alexander,” said Tulane President Michael A. Fitts during the announcement Thursday morning. “They not only provided a generous endowment for sailing but also made an investment in the construction of our new facilities in partnership with Community Sailing New Orleans.”

“We very quickly saw that this would be great for Tulane sailing, New Orleans and the sailing community.”

— Elizabeth “Libby” Connolly Alexander, a 1984 alumna and member of the Tulane Board

Community Sailing New Orleans was founded in 2010 as a nonprofit organization that strives to make sailing accessible to the local community. Construction of the Community Sailing Center, set to become the new home of Tulane sailing, will begin this fall at the Municipal Yacht Harbor on Lake Pontchartrain.

“Transformational opportunities do not come along everyday. We very quickly saw that this would be great for Tulane sailing, New Orleans and the sailing community,” said Elizabeth “Libby” Connolly Alexander, a 1984 alumna and member of the Tulane Board.

The rich history in sailing at Tulane dates back to 1941. In 1974, Tulane earned a national championship and has had several alumni compete as Olympic athletes within the sport, including John Dane III, who set sail during the 2008 Summer Olympics in Beijing.

“Lake Pontchartrain is such a great venue,” said Dane. “We’ve had many champions learn to sail on this lake because of its challenging conditions. Training here prepares you to compete anywhere in the world.”

Brinton Hoover, a second-year Tulane student and current member of the sailing club, said he is excited about what’s to come for the team and the sailing program in the upcoming year.

“Our team is not just successful because we are good sailors but because we’re all friends who share a common goal of competing to the best of our abilities,” said Hoover.

A national search will soon begin for the team’s head coach who will guide the program’s transition and lead current club members.